A Chorus Line audition for an upcoming Broadway production, features the formidable director Zach and his assistant choreographer Larry putting the dancers through their paces.

Every dancer is desperate for work (“I Hope I Get It”).

After the first cut, 17 dancers remain. Zach tells them he is looking for a strong dancing chorus of four boys and four girls. He wants to learn more about them, and asks the dancers to introduce themselves. With reluctance, the dancers reveal their pasts. The stories generally progress chronologically from early life experiences through adulthood to the end of a career.

The first candidate, Mike, explains that he is the youngest of 12 children. He recalls his first experience with dance, watching his sister’s dance class when he was a pre-schooler (“I Can Do That”). Mike took her place one day when she refused to go to class—and he stayed. Bobby tries to hide the unhappiness of his childhood by making jokes. As he speaks, the other dancers have misgivings about this strange audition process and debate what they should reveal to Zach (“And …”), but since they all need the job, the session continues.

Zach is angered when he feels that the streetwise Sheila is not taking the audition seriously. Opening up, she reveals that her mother married at a young age and her father neither loved nor cared for them. When she was six, she realized that ballet provided relief from her unhappy family life (“At the Ballet”), as did Bebe and Maggie. The scatter-brained Kristine is tone-deaf, and her lament that she could never “Sing!” is interrupted by her husband Al finishing her phrases in tune.

Mark, the youngest of the dancers, relates his first experiences with pictures of the female anatomy and his first wet dream, while the other dancers share memories of adolescence (“Hello Twelve, Hello Thirteen, Hello Love”). Greg speaks about his discovery of his homosexuality, and Diana recollects her horrible high school acting class (“Nothing”). Don remembers his first job at a nightclub, Richie recounts how he nearly became a kindergarten teacher, Judy reflects on her problematic childhood, and the 4’10” Connie laments the problems of being short. Finally, the newly-buxom Val explains that talent alone doesn’t count for everything with casting directors, and silicone and plastic surgery can really help (“Dance: Ten; Looks: Three [Tits and Ass]”).

The dancers go downstairs to learn a song for the next section of the audition, but Cassie stays onstage to talk to Zach. She is a veteran dancer who has had some notable successes as a soloist. They have a history together: Zach had cast her in a featured part previously, and they had lived together for several years. Zach tells Cassie that she is too good for the chorus and shouldn’t be at this audition. But she hasn’t been able to find solo work and is willing to “come home” to the chorus where she can at least express her passion for dance (“The Music and the Mirror”). Zach sends her downstairs to learn the dance combination.

Zach calls Paul on stage, and he emotionally relives his childhood and high school experience, his early career in a drag act, coming to terms with his manhood and his homosexuality, and his parent’s ultimate reaction to finding out about his lifestyle. Paul breaks down and is comforted by Zach. Cassie and Zach’s complex relationship resurfaces during a run-through of the number created to showcase an

unnamed star (“One”). Zach confronts Cassie, feeling that she is “dancing down,” and they rehash what went wrong in their relationship and her career. Zach points to the machine-like dancing of the rest of the cast: the other dancers who have all blended together, and who will probably never be recognized individually. Cassie defends the dancers and replies, “I’ll take chorus, if you’ll take me!” 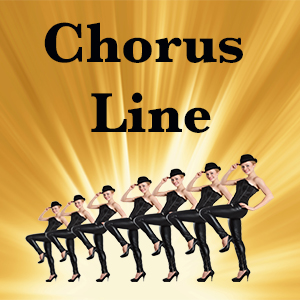 During a tap sequence, Paul falls and injures his knee that recently underwent surgery. After Paul is carried off to the hospital, all at the audition stand in disbelief, realizing that their careers can also end in an instant. Zach asks the remaining dancers what they will do when they can no longer dance. Led by Diana, they reply that whatever happens, they will be free of regret (“What I Did for Love”). The final eight dancers are selected: Mike, Cassie, Bobby, Judy, Richie, Val, Mark, and Diana.

“One” (reprise/finale) begins with an individual bow for each of the 19 characters, their hodgepodge rehearsal clothes replaced by identical spangled gold costumes. As each dancer joins the group, it is suddenly difficult to distinguish one from the other: Ironically, each character who was an individual to the audience seems now to be an anonymous member of a never-ending ensemble.

1 thought on “Chorus Line The Musical”