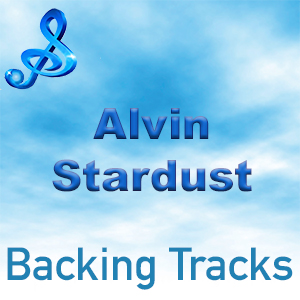 Alvin Stardust started life as Bernard William Jewry and was also known as Shane Fenton early on in his career.

From an early age Bernard was surrounded by musicians and entertainers as his mother ran a boarding house near to a theatre and made his stage debut at the age of 4. In the early 1960’s he was know as Shane Fenton having taken the place of a singer of that name in a band. Shane Fenton and The Fentones scored a few UK Chart Hits before disbanding.

In the 1970’s Bernard became Alvin Stardust and entered the scene as a Glam Rock performer and had chart successes with “Jealous Mind“, “You, You, You”, “Red Dress” and “Good Love Can Never Die”. In the 1980’s he had hits such as “Pretend” and “I Feel Like Buddy Holly” and took part in A Song For Europe with “The Clock On The Wall”. Alvin Stardust has appeared on stage in acting roles, has presented radio shows and hosted a children’s TV series.

Despite having prostate cancer, Alvin Stardust continued performing until his untimely death in October 2014. He had just completed his first album in 30 years.