Annie Get Your Gun: With music and lyrics by Irving Berlin and adapted from the book, this is the musical tale of Annie Oakley. Renowned in the Wild West as a sharpshooter, Annie meets her match, both romantically and professionally, in the form of fellow ace gunslinger Frank Butler. While Annie and Frank are performing as part of the famous traveling show headlined by the legendary Buffalo Bill, the two compete and flirt, with plenty of ups and downs along the way.

As the overture comes to an end a huge poster advertising Buffalo Bill’s Wild West Show flies out to reveal the lawn and front porch of the Wilson Hotel. Charlie Davenport with other members of Buffalo Bill’s troupe announce the show to the guests. Charlie wants to match the show’s sharpshooter, Frank Butler, against a local marksman. The hotel’s owner refuses. Wilson has just had Pawnee Bill’s Far East Show staying and, after that experience, he wants nothing more to do with show folk. Frank tries to convince Wilson to allow the match but even a $100 side bet won’t persuade him.

Frank admits his character to the admiring females who surround him when he sings “I’m a Bad, Bad Man”.

Suddenly the stuffed bird on Charlie’s sister Dolly’s hat is shot off. Annie Oakley has mistaken it for the real thing. Annie is t 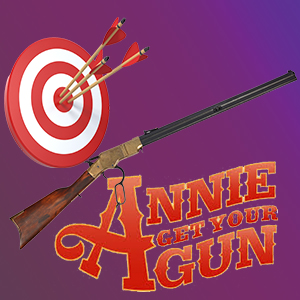 here to offer Wilson birds for the table with no buck-shot in them – she always kills with one shot to the head. Wilson says he’ll take two dozen, but Annie and the four siblings who follow her around are only able to count to twenty.

With Annie on the scene Wilson reckons that he can win his bet with Butler, and the shooting match is now on. When Frank re-appears, Annie is instantly smitten by him. She tells him that she has a shooting match lined up with a ‘swollen-headed stiff’, not realizing to whom she is talking. Frank explains about the kind of girl he is looking for, leaving Annie to lament that You Can’t Get A Man With A Gun.

After Annie wins the match, Charlie and Bill want her in the show. With the help of Frank they convince Annie to join the company and tour with them.

The troupe are aboard a train upon which the Indians have converted one of the sleeping cars into an Indian village, much to the conductor’s disgust. While the others go to eat, Annie’s youngest sibling, Little Jake, tries to teach her to read. Annie doesn’t want Frank finding out that she is illiterate, just when he is considering making her his partner on stage: Annie is still hoping for another kind of partnership – and Frank is weakening.

Annie, Bill and Charlie are enthusiastically plotting a thrilling new act for the show involving a motorcycle for Annie. Their combined plan is to outshine Pawnee Bill’s show completely and to impress Frank so much that he has to ask Annie to marry him. The scene ends with Annie singing her little brothers and sisters to sleep. Annie is now on the poster advertising the show and Frank is less than happy. Pawnee Bill arrives with his troupe, meeting his old friend and rival Buffalo Bill. Pawnee Bill has Sitting Bull as a new attraction.

With Annie ready to go on for her new act, Frank is about to propose. However, after the success of her surprise stunt, he is furious. Sitting Bull adopts Annie into the Sioux tribe but the first act ends with Annie discovering that Frank has left her behind to do his old act with Pawnee Bill instead.

Act two opens with Buffalo Bill’s troupe returning from touring Europe on the deck of a cattle boat, flat broke. Pawnee Bill’s messenger arrives to meet them with an invitation to a grand reception. Bill and Frank hatch a scheme of merging with Pawnee Bill’s company to keep their own show afloat. Annie still clings to her dreams of a much more personal sort of merger with Frank Butler.

At the reception, it turns out that Pawnee Bill is broke as well. The merger is off unless money can be got from somewhere. Annie willingly agrees to sell all her medals that she gained on the European tour.

Frank and Annie finally declare their love for each other. He offers her his three medals as a gift, but when he sees the chestful of medals she already has, the old rivalry between them breaks out again. A shoot-out is arranged for the next day on Governor’s Island.

On the loading platform for the ferry, Dolly is caught by Charlie and Sitting Bull on the point of bending Annie’s gun sights with a pair of pliers. They scare Dolly off, but then decide to do the bending themselves – they figure that if it’s fixed for Annie to lose the match, Frank will then want to marry her.

Before the shooting match can even begin, Annie and Frank are sparring with each other as usual. When they start to shoot, Annie misses the target. Frank lends her his gun, and immediately she is back on form again. Sitting Bull quietly suggest that she throw the match and win the man. She does. As predicted, Frank is happy and Annie finally gets her man.

2 thoughts on “Annie Get Your Gun The Musical”