Annie The Musical Backing Tracks:  – It is December of 1933 and America is deep in the midst of the Great Depression. On the Lower East Side of New York, the Municipal Orphanage, Girls’ Annex, has been the drab home of eleven-year-old Annie for all but the first two months of her life, when she was left on the front steps of the Orphanage with an unsigned note saying, “Please take good care of our little darling. Her name is Annie… We have left half of a silver locket around her neck and kept the other hals so that when we come back for her you will know that she’s our baby.” Early one chill morning, awake at 4:00 A.M., Annie wonders what her lost parents might be like (Maybe)…

It is December of 1933 and America is

deep in the midst of the Great Depression. On the Lower East Side of New York, the Municipal Orphanage, Girls’ Annex, has been the drab home of eleven-year-old Annie for all but the first two months of her life, when she was left on the front steps of the Orphanage with an unsigned note saying, “Please take good care of our little darling. Her name is Annie… We have left half of a silver locket around her neck and kept the other hals so that when we come back for her you will know that she’s our baby.” Early one chill morning, awake at 4:00 A.M., Annie wonders what her lost parents might be like (Maybe).

Miss Agatha Hannigan the mean-tempered spinster who is in charge of the Orphanage, is furious at finding Annie and the Orphans awake at 4:00 A.M. and puts them to work scrubbing the floor. Annie and the Orphans angrily lament the fact that they are living The Hard-Knock Life. Later that morning, Annie seizes opportunity to escape from the Orphanage by hiding in a laundry bag that is toted off into a truck. If her parents aren’t coming back for her, Annie is going to go find them. 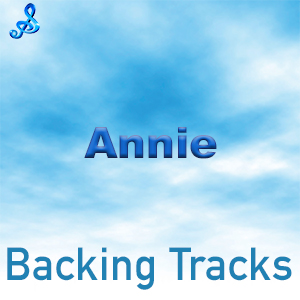 In New York’s St. Mark’s Place, city dogcatchers pursue stray dogs, but they miss one, a sad-faced mutt that is immediately adopted by Annie, who has been wandering alone through the wintry streets of the city. “They’re after me, too,” Annie tells the dog, and then assures him that “Everything’s gonna be fine for the both of us. If not today the… Tomorrow.” Officer Ward of the NYPD suspects that Annie’s dog is a stray, but she tells him that the dog is hers: “I call him Sandy because of his nice sandy colour.” Sandy responds to his new name when he is called by Annie, and Officer Ward is reluctantly persuaded that the dog indeed belongs to Annie.

Underneath the 59th Street Bridge is a so-called Hooverville, a Depression-style shanty town that is home to an assortment of unemployed New Yorkers who sarcastically let it be known that We’d Like To Thank You, Herbert Hoover. Annie turns up with Sandy, wondering if anyone in the Hooverville had ever left a baby at an orphanage. Her sunny disposition endears Annie to the Hooverville-ites, who inviter her to join them in a cup of Mulligan stew. The police raid the Hooverville, and Annie is arrested, although Sandy escapes.

Back at the Orphanage, Miss Hannigan’s nerves are at the breaking point from having to put up with Little Girls when Officer Ward arrives with Annie in tow. After Officer Ward leaves, Miss Hannigan is about to clobber Annie when into the Orphanage comes Miss Grace Farrell, who is the young and beautiful private secretary to Oliver Warbucks, the billionaire industrialist. Warbucks has decided to invite an orphan to spend the Christmas holidays at home. And, to the fury of Miss Hannigan, Annie is chosen by Miss Farrell and driven off in a limousine.

Annie and Grace arrive at Warbucks’s Fifth Avenue mansion, where a platoon of servants is busily cleaning. Annie is delighted to learn that, as a guest, she herself won’t have to do any cleaning (I Think I’m Gonna Like It Here).

Oliver Warbucks arrives home from a business trip and is unhappy to discover that the orphan invited by Grace isn’t a boy. Still, he agrees to take Annie to the movies, to the Roxy Theater, and Warbucks, Annie and Grace walk forty-five blocks to Times Square, through the streets of the city that Warbucks loves best (N.Y.C.) And, while walking with Annie, Warbucks finds himself unexpectedly growing to like her.

A week later, Grace Farrell turns up at the Orphanage to tell Miss Hannigan that Warbucks has decided to adopt Annie. Miss Hannigan is not happy about this news, to say the least. As Grace is leaving, she bumps into Miss Hannigan’s ne’er-do’well con artist brother, Rooster, who is broke, just out of prison and looking for a handout from his sister. And with Rooster is his floozy girl friend, Lily. Miss Hannigan, Rooster and Lily dream of better days for themselves onEasy Street.

In his Fifth Avenue mansion, Warbucks is about to tell Annie that he wishes to adopt her. But he first gives her a present – a new locket from Tiffany’s to replace the old, broken one she always wears. Annie, however, breaks down in tears – she doesn’t want a new locket because the old locket had been left with her by her parents. And the one thing she wants in the world is to find her mother and father. Crushed, stunned, Warbucks promises Annie that he’ll find her parents for her. Grace and the Servants assure Annie that Warbucks will find her mother and father (You Won’t Be An Orphan For Long).

In Rockefeller Center, on a radio program called “The Oxydent Hour of Smiles,” starring Bert Healy, Warbucks offers a certified check for $50,000 to anyone who can prove that they are Annie’s parents. Healy and the Boylan Sisters go off the air singing You’re Never Fully Dressed Without a Smile, a song that the Orphans hear over the radio in the Orphanage and imitate.

In Washington, at the White House, President Roosevelt and his Cabinet mirror the national gloom as they listen to a radio tirade against FDR. Warbucks arrives with Annie, who innocently blurts out to the glum group that things are bound to get better soon (Tomorrow Reprise). Everyone, including the President, is turned optimistic by Annie’s cheery spirits. A telegram arrives from New York saying that hundreds of couples claiming to be Annie’s parents are jamming the streets outside Warbucks mansion. Warbucks and Annie rush back to New York.

At the mansion, Grace sadly tells Warbucks and Annie that all of the couples who’d claimed to be her parents had turned out to be fakes – none of them knew about the locket. Alone with Annie, Warbucks tells her that before she came into his life Something Was Missing. Now, with seemingly no hope left of finding Annie’s parents, Warbucks says to Annie that he’d like to adopt her. She’s delighted, he’s delighted, and they both joyfully agree that I Don’t Need Anything But You.

At a party in the mansion to celebrate the adoption, the happy Servants feel as though it’s Christmas every day since Annie came along (Annie). As the adoption papers are about to be signed, Rooster and Lily, in their disguises as the Mudges, show up at the party and claim that Annie is their daughter. And they have a fake birth certificate to prove it, plus, thanks to Miss Hannigan’s connivance, half of a silver locket that appears to fit Annie’s half. Warbucks is vaguely suspicious of them, however, and asks that they come back for Annie and the $50,000 the following morning, Christmas. The Mudges leave and Annie rushes upstairs in tears just as President Roosevelt pays a surprise call on Warbucks. Grace, half remembering that she’d bumped into Rooster at the Orphanage, tells Warbucks that there is something phony about the Mudges. Warbucks turns to Roosevelt for help from the FBI.

Christmas morning, 1933, in the Warbucks mansion. Warbucks, Grace and FDR have been up all night, in constant telephone contact with the FBI, and they have unhappy news for Annie – her mother and father died many years ago. But then who are Ralph and Shirley Mudge? And who knew about the locket? Miss Hannigan! The Orphans and Miss Hannigan arrive to spend Christmas at the mansion. Rooster and Lily, again in their disguises as the Mudges, come to collect Annie and the check for $50,000. But the jig is up – the Secret Service arrests Rooster, Lily and Miss Hannigan, who is dragged away screaming. A huge Christmas box arrives for Annie – in it is Sandy, who has been found for Warbucks by the police. Happy ending as Annie, Warbucks, Grace and all agree that this Christmas is the beginning of a wonderful new life for not only them but for everyone in America (A New Deal For Christmas).

2 thoughts on “Annie The Musical”