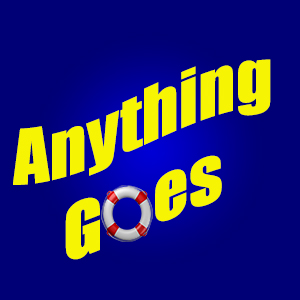 Anything Goes is a musical with music and lyrics by Cole Porter.   It is set aboard the ocean liner S. S. American, where nightclub singer/evangelist Reno Sweeney is en route from New York to England.

The entire action of Anything Goes takes place aboard the “S.S. American” sailing from New York to England. Just before departure newspaper cameramen are snapping pictures of celebrities. Among them are beautiful American Heiress Hope Harcourt, her foppish fiance Sir Evelyn Oakleigh and Hope’s mother. Mrs. Wadsworth T. Harcourt may not be the beauty her daughter is, but she is slightly antique and therefore receives more attention from Sir Evelyn, obviously an admirer of fine old things. Other travelers arriving aboard are Bishop Dobson, shepherding two natively garbed Chinese converts, and Elisha J. Whitney, adipose and pompous Wall Street broker. Reno Sweeney, ex-evangelist turned to more profitable employments, and her bevy of not-so-angelic Angels are also passengers on the “S.S. American.” The red dresses and cosmetic beauty of Angels Purity, Chastity, Charity and Virtue suggest that they are more sinning than sinned against. Next we meet Billy Crocker who is by his own later admission “a broken-down broker.” Actually he is less than that. He is a flunky of irascible E. J. Whitney. Reno and Billy, old friends, meet again; they acknowledge their mutual admiration in You’re the Top. Billy has not planned to sail, but when he learns that Hope Harcourt (another, dearer friend) is planning to marry the guffawing boob Sir Evelyn Oakleigh, he decides to stay aboard as a stowaway and somehow contrive to break up the proposed marriage.

We learn from crew chit-chat that Moonface Martin, Public Enemy Number 13 and a fugitive from the Feds, has boarded the liner. Since he is disguised in clerical black, confusion is inevitable and Bishop Dobson is arrested and heard from no more. Moonface ingeniously assumes the title and name of Reverend Dr. Moon. His moll Bonnie sails with him. In Bon Voyage Hope, Sir Evelyn, Billy, Moon, other trippers and the ship’s crew announce that the “S.S. American” is on her way.

Billy Crocker, having no good reason to suspect that Moon is not a man of the cloth (except that he is excessively furtive and fidgety and speaks fluently the patois of prisons) gratefully and unquestioningly accepts the passport and passage ticket belonging to Moon’s colleague, Snake Eyes Johnson. Johnson, it develops, will not be making the trip with Moon: at the gangplank he yielded to the superior claim of Federal authorities.

That night on deck, Hope tries to interest Sir Evelyn in the romantic implications of moonlight. Man of conservative taste that he is, he replies that the general setting is “somewhat overdone.” Billy joins them and convinces the impressionable Oakleigh that he is uncontrollable seasick. Left alone, Hope and Billy comment with enthusiastic approval on the evening (It’s Delovely). They are joined by sailors and female passengers who concur choreographically.

In their stateroom Moon and Billy decide that Billy needs a disguise so that his boss, Whitney, will not recognize him and spoil things. Moon goes out into the corridor and returns with an armload of shoes. Billy puts this down to Dr. Moon’s generous impulses. Next, Moon enters Whitney’s stately stateroom and contrives to jostle the broker’s glasses off and take them. Extremely nearsighted, E. J. is nearly blind without them. Moon has rendered Billy another good turn. At last Moon tells Billy he is a Public Enemy, albeit only Number 13. Since, however, Public Enemy Number One, Snake Eyes Johnson, is no longer active, there is room at the top. Billy realizes he needs more than a change of shoes to bring off an effective disguise. Bonnie volunteers a sailor suit – the sailor is still sleeping (in her cabin!).

Hope strolls on deck, comfortably attired in proper Thirties casuals: a halter and a pair of enormous, flaring satin slacks. With her is Sir Evelyn in natty knickers, and her mother. Hope tells her fiance that she was on deck with Billy till 7:30 that morning, but fails to ignite Oakleigh’s sluggish passions. Hope despairs.

Moon and Billy’s disguises are no match for Reno Sweeney’s sharp eyes. She recognizes them instantly (Reno, obviously, also knows Moonface Martin.) Billy asks Reno to vamp Oakleigh in his stateroom, compromise him (Moon as witness) and thus liberate Hope for himself. Reno, Billy and Moon declare the importance, in such emergencies, of Friendship.

As Oakleigh is shaving and in semidishabille, Reno enters his quarters and proceeds to distract him. But Moon, timing his entrance badly, barely discovers them in flagrante, let alone delicto. He finds them, instead, merely discussing dashedly clever American slang expressions like “I go for you.” Outside on deck, Reno describes a strange new affection she feels toward Sir Evelyn in I Get a Kick Out of You.

On deck Billy, to be near Hope, assumes a number of disguises: first that of an old lady, then, by making a beard from a swatch of Mrs. Harcourt’s fur stole, as a “Chinchillian” nobleman. Finally, the ship’s Purser “recognizes” Billy as Snake Eyes Johnson. Billy, a little pridefully, accepts the error.

All are thrilled to be in the company of a celebrity except Hope, who feels Billy may have assumed one identity too many. Reno gives voice to everyone’s feelings about the proceedings when she sings a trumpeting assertion that Anything Goes. The girls and sailors, ever at the ready, join in with a marvelously complex tap routine.

In the grand lounge of the liner, passengers and crew hymn their praises of Billy, Public Enemy Number One, for bringing a generous measure of glamor and excitement to the voyage. Bonnie moves that the assembly make the best of a good time in Let’s Step Out, after which Reno seconds the motion in Let’s Misbehave. Even Sir Evelyn is sufficiently inflamed to join in singing the lyrics. Reverend Dr. Moon is urged to hold a revivalist meeting with the notorious killer, naturally, as chief confessor. After Moon’s impromptu, altogether incoherent sermon, Oakleigh confesses that once, while in the Orient, he led a Chinese girl astray. “We had a romp in the rice and enjoyed it very much,” he declares rapturously. Now, Billy’s turn. What should he say? Hope suggests he tell the truth; he agrees. He scolds them all for being proud to know a cold-blooded killer and tells them who he really is. Justice is swift – he is arrested for impersonating a celebrity. Moon joins him in the ship’s brig. Reno, however, is ready with a song and leads the entire company in a general confession of sins, remorse and a change in conduct – Blow, Gabriel, Blow.

Five days later and with England’s shore close at hand, Billy and Moon are still in the brig. Billy sings of his love for Hope in All Through the Night, while she, unseen by him, joins in from the bridge. Moon attempts to lift Billy’s spirits with sound advice: Be Like the Bluebird. Bishop Dobson’s conversion of the pair of Chinese has not been wholly successful, it seems, for they are cast into the brig for laundering the third-class passengers in a crap game. To bring them to their moral senses, the Captain has punished them with a two-hour sentence. Hope visits Billy and tells him her mother’s heart is set on having Sir Evelyn as son-in-law and she cannot bear to disappoint her. When she leaves it occurs to Moon that he and Billy might introduce the two new occupants of their cell to a famous Occidental pasttime, strip poker. Moon’s rules are hard to follow and in practically no time he and Billy are dressed as Chinese.

On deck Reno and her Angels are already homesick. Take Me Back to Manhattan, they plead. A thoughtful sailor provides them with black, gold-headed canes with which to embellish their dance. Sir Evelyn tells Reno that he, an upright man, has no choice but to marry Hope. Mrs. Harcourt, somewhat impatiently, has arranged for their wedding to take place before they dock. The Captain has scarcely begun the ceremony when Billy and Moon, disguised, interrupt. Reno is also disguised as a Chinese girl (with what luckless girl she may have played poker is left unexplained). Billy, adept by now at all sorts of dialects, confronts Oakleigh with “Prum Brossom” – the girl he wronged. Both Hope and he brilliantly penetrate the disguises and play the game. To make fair restitution, Oakleigh generously sacrifices Hope to one of the Chinese. The offer is accepted. A man of honor, he proposes marriage to Plum Blossom. Reno accepts him. Disguises dispensed with, Billy introduces E. J. Whitney (he can see once more) to Mrs. Harcourt. They hit it off immediately. A telegram from Washington, D.C. reveals that Moon has been kicked all the way downstairs. No longer a Public Enemy, he is now at best a Public Nuisance.

2 thoughts on “Anything Goes The Musical”