Billy Elliot is a British dance drama film releases in 2000.  It is about a boy in the north-east of England wanting to become a professional ballet dancer against the backdrop of the 1984-85 coal miners’ strike.

Set in 1984 at the time of the Miner’s Strike,  in County Durham , Northeast England.

Family patriarch, widowed Jackie Elliot, and his eldest son Tony Elliot work down in the mine, and Jackie’s younger son, eleven year old Billy Elliot, is expected to take his place alongside his father and brother when the time comes. However, Jackie, Tony and their fellow miners are currently in a bitter dispute with the Unions, The National Miner’s Strike.

With the strike foremost on Jackie and Tony’s minds, Billy is left largely to his own devices, his father giving him 50p for the community boxing class down at the boys’ club when Billy is not at home looking after his gram, who has early onset Alzheimer’s. Learning how to box is another of the activities passed down along the male lineage of the Elliot family. However, Billy doesn’t much like it and isn’t very good at it, instead more interested in the movement put to music in the form of the girls’ ballet class held on the other side of the gym by chain-smoking Mrs. Wilkinson. 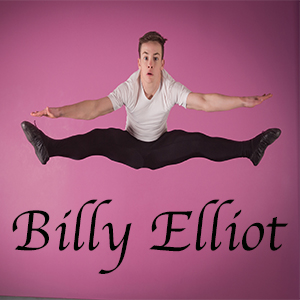 Soon, Billy has ditched the boxing, instead secretly attending the ballet class with Mrs. Wilkinson’s blessing. She can see that Billy not only has natural talent but passion, unlike most of the girls in the class, so much so that she believes he may have a real shot at making it into the Royal Ballet School. However, Billy has to decide whether this path is one he wants to take, especially as it means coming clean to his family, Jackie and Tony who may feel emasculated in the process, especially if their miner friends find out, and especially in Billy’s destiny as a coal miner himself.

Billy’s involvement in the ballet may tear the family apart in ways he didn’t even imagine. But Billy may get guidance in following his dreams regardless of the views of others, by his best friend Michael Caffrey, and a letter left to Billy by his mother before she died.

2 thoughts on “Billy Elliot The Musical”