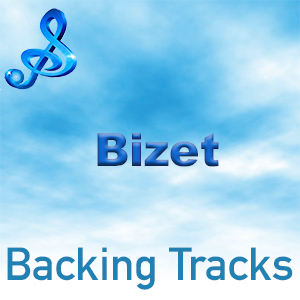 Georges Bizet (1838 – 1875) was born on 25 October 1838 in Paris.  His father, Adolphe, was a hairdresser and wigmaker and his mother, Aimée, was an accomplished pianist. He was an only child.  He received his first piano lessons from his mother and showed immense aptitude for music; he quickly picked up the basics of musical notation.

In October 1848, just before his  tenth birthday, Bizet was admitted to Paris Conservatory of Music. His teachers were Pierre Zimmermann (fugue and counterpoint; often assisted by his son-in-law Charles Gounod), Antoine François Marmontel (piano), François Benoist (organ) and, on Zimmermann’s death, Fromental Halévy, whose daughter Bizet later married. He was awarded the first prizes for organ and fugue in 1855, completed his earliest compositions there and earned the Prix de Rome in 1857.

Bizet wrote his first symphony, ‘Symphony in C’ in 1855.  It was written as a student’s assignment and was never performed in his lifetime: it remained hidden until 1933 when it was discovered in the archives of the Paris Conservatory.  It was performed for the first time in 1935 and received acclaim as a junior masterwork.

The comic opera Don Procopio was written in 1858 as part of Bizet’s obligation under the conditions of the Prix de Rome.  The score to this also remained hidden, only to be found in 1894 and then performed in 1906.

In July 1860, Bizet began to write a symphony in which each of the four movements would be a musical evocation of a different Italian city – Rome, Venice, Florence and Naples. The first version was completed in 1866 and went through several revisions until 1871.  It was published as the Roma Symphony in 1880.

In 1862 Bizet’s former teacher, Halevy died, leaving the opera Noe unfinished.  Bizet completed this opera, but it was not performed until 1885, after Bizet’s own death.

Bizet wrote the piano duet entitled Jeux d’enfants, and a one-act opera, Djamileh, which opened at the Opéra-Comique in May 1872.  Unfortunately, it was badly staged and was closed after only eleven performances.  It was not heard again until 1938.

Bizet completed Carmen in 1875. The opera is based on a novella of the same title written in 1846 by the French writer Prosper Mérimée.  It is Bizet’s most significant work and was premiered on 3 March 1875, at the Opéra-Comique in Paris.

Bizet was an outstanding pianist, but seldom performed in public. Many of his works were not performed during his lifetime and consequently did not receive the acclaim he deserved. Music pundits in later years praised him for his brilliance and originality and his untimely death was considered to be a tremendous loss to French musical theatre.  He was buried in the Père Lachaise Cemetery in Paris, alongside other prominent musical figures like Chopin and Rossini.