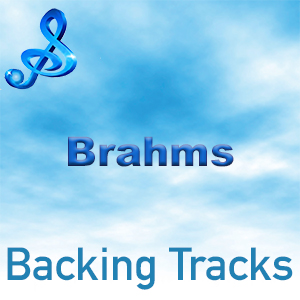 Johannes Brahms (1833–1897) was born in Hamburg, Germany.  He was a  composer and pianist who wrote symphonies, concerti, chamber music, piano works, and choral compositions and was considered one of the greatest composers of the 19th Century.  His writing style followed the Classical tradition of Joseph Haydn, Mozart, and Beethoven.

Johannes Brahms (1833–1897) was born in Hamburg, Germany.  He was a  composer and pianist who wrote symphonies, concerti, chamber music, piano works, and choral compositions and was considered one of the greatest composers of the 19th Century.  His writing style followed the Classical tradition of Joseph Haydn, Mozart, and Beethoven.

Brahms was introduced to music at a very early age by his father, Johann, who was a double bassist in the Hamburg Philharmonic Society.  At the age of seven, he was sent for piano lessons and was an accomplished musician by the time he became a teenager.  Between the ages 14 and 16 he earned money to help his family by playing in rough inns in the dock area of Hamburg while composing and also giving recitals.

In 1850 he met Eduard Reményi, a Jewish Hungarian violinist, with whom he gave concerts and from Eduard, he learned about Roma (gypsy) music: an influence that remained with him throughout his lifetime.

In 1853 Brahms was introduced to the renowned German composer and music critic Robert Schumann. The two men became great friends and Schumann’s  public praise of Brahms helped to establish the young composer in the music world.

Over the next several years, Brahms held several different posts.  Between 1857 and 1860 he taught piano and conducted a choral society at the Court of Detmold and in 1859 was appointed conductor of a women’s choir in Hamburg. He also continued to write his own music, which included. His String Sextet in B-flat Major (1860) and Piano Concerto No. 1 in D Minor (1858).

In 1863, Brahms settled in Vienna where he secured the post of director of the Singakademie. By 1872 he was principal conductor of the Society of Friends of Music (Gesellschaft der Musikfreunde), and for three seasons he directed the Vienna Philharmonic Orchestra.

His own work continued.  In 1868 he finished Ein Deutsches Requiem:  a composition based on Biblical text which is often sited as one of the most important pieces of choral music created in the 19th Century.  It was first performed at Bremen on Good Friday in 1868 and its impact was so great that it was then performed throughout Germany.

Brahms also wrote successful works in a lighter vein. In 1869 he offered two volumes of Hungarian Dances for piano duet which were arrangements of Roma tunes he had collected over the year.  These proved to be a great success worldwide.

In 1868–69 he composed his Liebeslieder (Love Songs) waltzes for vocal quartet and four-hand piano accompaniment. He also composed many other great songs around this time.

By the 1870s Brahms was writing significant chamber works and moving towards orchestral composition. He resigned as a director of the Society of Friends Music  in 1875 and from then on devoted his life almost solely to composition. In 1876 he completed his Symphony No. 1 in C Minor, in 1877 he produced his Symphony No. 2 in D major , the Violin Concerto in D Major in 1878, the Piano Concerto No. 2 in B-flat Major in 1881 and in 1883 came his Symphony No. 3 in F Major.  His last symphony, No. 4 in E Minor, was begun in 1884.

In 1896 Brahms completed his Vier Ernste Gesänge (Four Serious Songs), or bass voice and piano, on texts taken from the Hebrew Bible and the New Testament.  This was a pessimistic work about the welcoming of death as the healer of pain and weariness.  In the same year, he was compelled to seek medical treatment where it was discovered that he had a seriously diseased liver.  He appeared in concert for the last time in March 1897 and in the April he died of cancer.