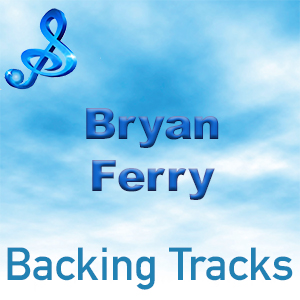 Bryan Ferry CBE is a British singer / songwriter  and musician who came to fame with the very successful band Roxy Music. As lead singer of the band, he achieved several number one albums and singles (UK Charts) during the 1970’s-1980’s as well as charting as a solo artist.

In the late ’80’s he decided to put his involvement with the band on hold and concentrate on his solo career and his 6th solo album “Girls and Boys” attained number 1 status in the UK Album charts. In 2001 Roxy Music reformed and toured extensively for a while, but did not record any new material, although Bryan Ferry continued to work in the studio to produce “Frantic” an album with a mix of covers and original songs.

He was awarded a CBE honour for Services to Music in 2011.

Bryan Ferry Backing Tracks -A Hard Rain’s Gonna Fall,Angel Eyes, Avalon, Don’t Stop The Dance, Driving Me Wild , Goddess Of Love, I Put A Spell On You, It’s All Over Now Baby Blue, Kiss And Tell, Let’s Stick Together, Love Is The Drug, Price Of Love, Slave To Love, Smoke Gets In Your Eyes, These Foolish Things, The Times They Are A Changing, This Is Tomorrow,