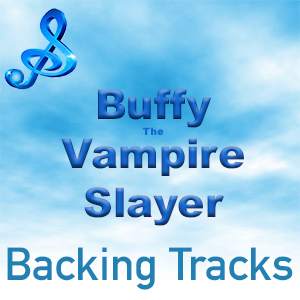 Buffy the Vampire Slayer is an American supernatural drama television series based off the 1992 film of the same name.

Buffy Backing Tracks – Overture / Going Through The Motions, Rest In Peace, Something To Sing About, Under Your Spell,

The series narrative follows Buffy Summers (played by Sarah Michelle Gellar), the latest in a line of young women known as “Vampire Slayers”, or simply “Slayers”. In the story, Slayers are “called” (chosen by fate) to battle against vampires, demons, and other forces of darkness. Being a young woman, Buffy wants to live a normal life, but as the series progresses, she learns to embrace her destiny. Like previous Slayers, Buffy is aided by a Watcher, who guides, teaches, and trains her. Unlike her predecessors, Buffy surrounds herself with a circle of loyal friends who become known as the “Scooby Gang”.

“Once More, with Feeling” is the seventh episode of the sixth season  and the only one in the series performed as a musical.Throughout Buffy the Vampire Slayer, music serves as a narrative tool, integral to character development and action. The mood is set by music, characters discuss it, and writers use it to emphasize differences between generations. In an essay on the use of music in the series, Jacqueline Bach writes that in conjunction with the sixth season themes of growing up, “Once More, with Feeling” gives music a central role instead of keeping it in the background.

When Buffy is on patrol, she laments in song about how uninspired her life has become (“Going Through the Motions”). The next morning at the Magic Box, the gang reveal that they also sang that evening. Led by Giles, the gang theorizes about the cause of the singing; they sense no immediate danger but agreeing that by working together they can overcome anything (“I’ve Got a Theory/Bunnies/If We’re Together”). Buffy learns that the whole town is affected when she looks outside the shop to see a large group (led by series writer and producer David Fury) singing and dancing about how a dry-cleaning service got their stains out (“The Mustard”).

Tara and Willow leave to “research” at home, but dally along the way while Tara muses about how much Willow has improved her life (“Under Your Spell”). The next morning, Xander and Anya perform a duet about their secret annoyances with each other and their respective doubts about their impending marriage (“I’ll Never Tell”). They realize that the songs are bringing out hidden secrets, and later insist to Giles that something evil is to blame. As they argue, they walk past a woman (series writer and producer Marti Noxon) protesting a parking ticket (“The Parking Ticket”). That evening, Buffy visits Spike, who angrily tells Buffy to leave him alone if she will not love him (“Rest in Peace”).

Dawn tells Tara she is glad that Tara and Willow have made up after their argument. Since Tara has no recollection of an argument, she suspects that Willow has used magic to alter her memory. She goes to the Magic Box to consult a book, leaving Dawn alone. Dawn starts to bemoan that no one seems to notice her (“Dawn’s Lament”), but is soon seized by minions of Sweet (Hinton Battle), a zoot suit-wearing, tap-dancing, singing demon. They take Dawn to The Bronze, where her attempt to escape transforms into an interpretive dance with the minions (“Dawn’s Ballet”) before she meets Sweet. He tells Dawn that he has come to Sunnydale in response to her “invocation”, and he will take her to his dimension to make her his bride (“What You Feel”) when his visit is complete.

At the Magic Box, Giles recognizes that he must stand aside if Buffy is to face her responsibilities in caring for Dawn instead of relying on him (“Standing”) and Tara finds a picture of the forget-me-not flower Willow used to cast a spell on her in a book of magic. Giles and Tara separately resolve to leave the people they love, respectively Buffy and Willow — Giles wants to leave Buffy for her own good, while Tara wants to leave Willow because she has become horrified by Willow’s magical manipulation of their relationship (“Under Your Spell / Standing—Reprise”). Captured by Spike outside the store, one of Sweet’s minions conveys a challenge from Sweet for Buffy to rescue Dawn from The Bronze. Giles forbids the gang to assist Buffy, so she goes alone, despite having no will to do so; eventually Giles and the Scoobies change their minds and leave to catch up. Although Spike initially thinks that things would be better for him if Buffy was dead, he also changes his mind and decides to help Buffy; Sweet opines that Buffy is drawn to danger (“Walk Through the Fire”).

Meeting Sweet at The Bronze, Buffy offers a deal to Sweet: she will take the place of her sister if she can’t kill him. When asked by Sweet what she thinks about life, Buffy gives her pessimistic take on its meaning (“Something to Sing About”). When the others arrive, she divulges that Willow took her from heaven, and Willow reacts with horror at finding out what she’s done. Upon divulging this truth, Buffy gives up on singing and dances so frenetically that she begins to smoke — on the verge of combusting as Sweet’s other victims have been shown to do — until Spike stops her, telling her that the only way to go forward is to just keep living her life. Xander then reveals that he, not Dawn, called Sweet, hoping he would be shown a happy ending for his marriage plans. Sweet, after releasing Xander from the obligation to be Sweet’s “bride”, tells the group how much fun they have been (“What You Feel—Reprise”) and disappears. The Scoobies realize that their relationships have been changed irreversibly by the secrets revealed in their songs (“Where Do We Go from Here?”). Spike leaves The Bronze, but Buffy follows him out, and they kiss (“Coda”).

1 thought on “Buffy The Vampire Slayer”