Calamity Jane is a musical based on the historical figure of frontierswoman Calamity Jane. The non-historical, somewhat farcical plot involves the authentic Calamity Jane’s professional associate Wild Bill Hickok, and presents the two as having a contentious relationship that ultimately proves to be a facade for mutually amorous feelings. The Calamity Jane stage musical originated as a live adaption of Calamity Jane, the 1953 Warner Bros. movie musical with Doris Day. First produced in 1961, the stage musical Calamity Jane features six songs not heard in the movie.

Calamity Jane Backing Tracks – Black Hills Of Dakota … Deadwood Stage … Higher Than A Hawk, Deeper Than A Well … I Can Do Without You … It’s Harry I’m Planning To Marry … Just Blew In From The Windy City … Secret Love

Calamity Jane (Doris Day) rides into Deadwood, Dakota Territory as shotgun messenger on the stagecoach. The local saloon bar, the Golden Garter, sends for beautiful women to appear on the stage and entertain the residents of a town with few females. Unfortunately, the men are anything but pleased when the latest “woman” turns out to be a man named Francis Fryer (Dick Wesson), who does a stage act in drag (reluctantly) and goes under the name Frances Fryer. The saloon owner was misled by the girlish-sounding name when reading an advertisement in the newspaper. The men begin to storm out. Calamity, thinking quickly in all the panic, vows to get them the one woman they are all drooling over: singer Adelaid Adams (Gale Robbins), who is in Chicago. Francis Fryer points out that Adams wouldn’t be seen dead in that town but Calamity is still determined to bring her. Wild Bill Hickok (Howard Keel) laughs at the idea and tells Calamity that the night Adams steps on the stage, he will come to the opening dressed as a Sioux squaw lugging a papoose.

Calamity travels to Chicago, where Adams is giving a farewell performance (she was on her way to Europe directly after the performance) Adelaid, sick of the ‘primitive’ Chicago, gives her costumes to her maid, Katie Brown (Allyn McLerie), who dreams of becoming a stage singer. She tries on one of the dresses and starts to sing. When Calamity walks in, she mistakes Katie for Adelaid. Katie takes advantage of the error and poses as Adelaid Adams to make her dream come true.

The ride back to Deadwood is rocky, as they are chased by Indians. Later, when Katie gives her first performance, Calamity says she didn’t sound that way in Chicago. When Calamity tells Katie to sing out, she bursts into tears and admits that she is not Adelaid Adams. The Golden Garter falls silent. Everyone present is on the verge of rioting, but Calamity fires a shot into the air and defends Katie. They allow Katie to carry on, and her performance wins th 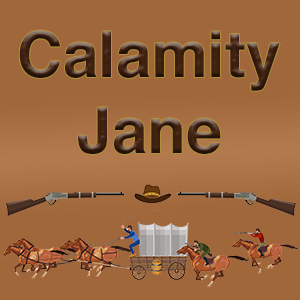 em over. On the balcony above, Bill Hickok, dressed as an Indian woman, ropes Calamity and hangs her high and dry.

Calamity and Katie become good friends, and Katie moves into Calamity’s cabin with her. At first the cabin is shabby and in disrepair but Katie suggests they fix it up with the help of a “Woman’s Touch”. In order to attract Lieutenant Danny Gilmartin (Philip Carey), the man she’s madly in love with, Calamity dresses, looks and acts more like a lady. One day, Danny and Wild Bill Hickok (who are both in love with Katie) pay a visit to Calamity’s cabin. Katie manages to lure Bill out of the cabin for a few minutes; while alone with Danny, she tells him straight out that Calamity loves him and that she, Katie is trying to stay away from him to keep her friendship. However, Danny tells Katie he is not interested in Calamity. Later, Katie tells the two men that Calamity has changed and had a makeover proving she will be accepted at a local ball the following weekend. They draw straws and Danny wins, meaning he’ll go with Katie. Now in a pink ballgown and looking quite a lady, Calamity pretends to be fine with the arrangement but is stung when Danny gives her a soft kiss on the forehead. On the way to the ball, all the attendants riding in their wagons sing about the beauty of the Black Hills of South Dakota.

At the ball, Calamity becomes increasingly jealous while watching Katie and Danny dance together. They adjourn to the garden where, as Danny holds her and moves in for a kiss, Katie can no longer resist him. Angry and betrayed, in the ballroom Calamity shoots the punch cup out of Katie’s hand and everybody is horrified. Back at the cabin, Calamity throws out Katie’s things and threatens to shoot her if she ever sees her again, but the scene ends with Calamity in floods of tears.

Calamity later confronts Katie while she is performing, and warns her to get out of town. But Katie is not frightened. She borrows a gun from one of the cowboys, and tells Calamity to hold up her glass. Taunting her about being too afraid, she boldly holds it up. A gunshot finally rings out, and the glass falls from Calamity’s hand, but it wasn’t Katie who fired; it was Bill, who lets Katie take all the credit. Humiliated, Calamity storms out. But before she can mount her horse, Bill grabs her, throws her onto his horse-drawn cart and rides off.

In the woods, Bill tries to talk some sense into Calamity, and reveals that he shot the glass out of her hand to teach her a lesson and that scaring Katie out of town would not stop Danny from loving her. Calamity is heartbroken, and reveals she was crazy about Danny (whom she had earlier saved from capture by Indians), while Bill admits that he was in love with Katie. Calamity tells Bill there won’t be another man like Danny, not for her, however she and Bill end up in a passionate embrace and kiss, and she realizes it was him she loved all along. And when Bill asks her what happened to that lieutenant she was telling him about, she answers “I’ve never heard of him.”

The sun rises on a new day where a much happier Calamity sings “Secret Love” before she rides into town, but when she talks to the people, they just ignore her. She finds that Katie decided alone to leave for Chicago, feeling guilty about betraying her best friend. Danny is furious with Calamity for driving Katie out of town and demands she listen to him read a note Katie left. Calamity leaps back onto her horse and chases after the stagecoach, eventually catching up with it. She tells Katie she isn’t in love with Danny and is marrying Bill, and the two women become friends again.

A double wedding follows. When Bill finds Calamity’s gun under her wedding dress, she jokes it’s just in case any more actresses roll in from Chicago. The movie ends with the two happy couples riding out of town on the stage.