Copacabana is a 1985 American made-for-television musical film, stage musical and nightclub show written by Barry Manilow and based on his 1978 song of the same title. The show toured the United States and, as of 2006, became available to license to performing companies and schools for the first time.

The story follows Stephen, a young aspiring songwriter, as he composes what he hopes will become a hit musical.

His imagination takes him back to 1947 as he creates a story surrounding an ambitious young singer Lola la Mar who arrives in New York City from Tulsa hoping to become a star. Meanwhile, Tony Forte, a 1947 incarnation of Stephen, is attempting to make it as a songwriter while tending bar at the famous Copacabana Nightclub. Tony instantly falls for Lola as she wanders into the Copacabana. He, along with former “Copa Girl” Gladys, introduce her to the owner of the club Sam Silver, to get her a job as a new Copa Girl. The two try to make it in New York in their respective fields, but do not find it easy. After Tony helps Lola improve a song written by her former music teacher, Sam gives her a job as a Copa Girl at his club. The two fall in love, as Tony writes a song for Lola as she listens.

Stephen’s voice can be heard narrating the events as Rico Castelli, an Italian gangster from Cuba, enters the Copacabana with the now-waning star Conchita Alvarez. Sam confronts Rico about the disappearance of Copa Girls each time he comes to the club, and demands he leave. However, Rico, armed with thugs, is able to stay long enough to meet and develop an interest in Lola la Mar. He drugs her and flies her back to Havana, Cuba, to star in his own nightclub -the Tropicana.

In Havana, Rico informs Conchita that she will be replaced by a new, younger actress: Lola. Conchita, frustrated and upset, goes to Lola in order to “welcome” her. Back at the Copacabana, Tony, Sam, and Gladys learn that Lola was kidnapped and taken to Cuba. Tony immediately heads to save her, and Sam, after some convincing from Gladys, agrees to help him. Conchita, initially intending to threaten Lola, finds that she is truly a victim, and instead treats her with sympathy. Stephen can be seen again, this time expressing his love for the troubled Lola, while also sharing his lament for she is merely a figment of his imagination. 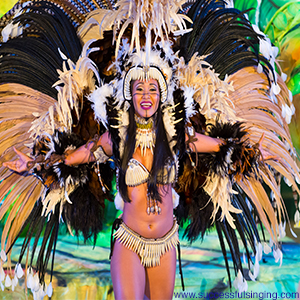 Tony and Sam, now in Cuba, find Conchita and asks her for her help. She agrees, and pretends to guide Lola to become her replacement, while telling her to play along. Near the end of the Tropicana performance of “El Bravo,” Tony runs on stage, reunited with Lola once again. However, Rico is close behind, waving a gun, and points the barrel at Tony. A single gunshot is heard, and Rico falls to the floor. Conchita, saving Tony and Lola from the perils she faced for years, shot her love Rico to his death.

Tony and Lola are finally reunited and go back happily to the Copacabana.

Back in the present, Stephen has finished his song. His wife, Samantha, is urging him to dress for their anniversary dinner. Stephen realizes that Lola was simply an incarnation of his wife, and finds he has a new sense of love for her. Her parents, who were the base for the characters Sam and Gladys, also appear, and he realises his imagination had simply morphed reality into something a bit more elaborate.

2 thoughts on “Copacabana (The Musical)”