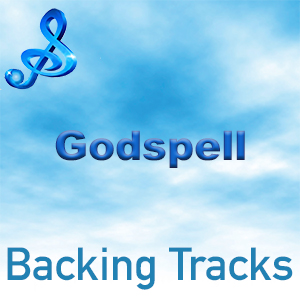 Godspell – A musical mostly based on the Gospel of Matthew (from the Christian Bible).

John-Michael Tebelak was studying Greek Mythology at Carnegie Mellon University when he became fascinated by the Gospels as told in the Bible, so weeks away from having to hand in his final thesis on his chosen subject, he wrote the manuscript for Godspell instead! Originally the play had no songs, but when it was recognised as having potential by Carnegie alumnus Charles Haid he brought it to the attention of producers Edgar Lansbury, Joseph Beruh, and Stuart Duncan who wanted to open it Off-Broadway, composer Stephen Schwartz was brought in to write the score and lyrics.

The show opens with God’s voice, as spoken by Jesus, declaring his supremacy: “My name is Known: God and King. I am most in majesty, in whom no beginning may be and no end.” (“Opening (Monologue)”). The cast then enters and takes the roles of various philosophers who sing their philosophies, first alone, then in cacophonous counterpoint (“Prologue: Tower of Babble”).

In response, John the Baptist enters blowing a shofar to call the community to order. He then beckons them to “Prepare Ye, The Way of the Lord!” and baptises the cast (“Prepare Ye”). John gives a short sermon, as Jesus watches quietly. Jesus then announces his presence and says that he also wishes to be baptised. John instead asks to be baptised by Jesus. Jesus explains that “We do well now to conform with all that God requires” and is baptised by John. The cast enters and sings with Jesus (“Save the People”).

In his first parable, Jesus explains that he has come “not to abolish the law and the prophets, but to complete”. Jesus explains to the cast that those who adhere to the law of God will earn the highest place in the Kingdom of Heaven. He tells them the parable of the Widow and the Judge, demonstrating that God is a just jurist who will support those who cry out to him.

The cast begins to understand Jesus’ teachings and take it upon themselves to tell the story of the Pharisees and the tax gatherer praying in the temple: “Every man who humbles himself shall be exalted!”

As Jesus teaches the law of the offering gifts at the altar, the cast makes offerings of themselves. They are taught that to approach God’s altar, they must be pure of heart and soul. They then act out the story of a master and a servant who owes him a debt. The servant asks his master for pity in repaying the debt, and the master absolves it. The servant then turns to a fellow servant who “owed him a few dollars” and demands that it be paid in full. The master, hearing this, then condemns the servant to prison. Jesus explains the moral: “Forgive your brothers from your heart.” The character telling the parable sings “Day by Day”, and the cast joins in. After the song, Jesus teaches that if one part of you offends God, it is better to lose it than to have the whole of the body thrown into hell.

The cast then plays charades to finish several statements posed by Jesus, including “If a man sues you for your shirt…” and “If a man asks you to go one mile with him….” The cast then performs the Parable of the Good Samaritan as a play-within-a-play. Jesus explains the need to “love your enemies” and “not make a show of religion before men”. He says: “God will reward a good deed done in secret” (“Shhh! It’s a secret!”).

The cast then performs the parable of Lazarus and the rich man. On earth, the rich man feasts, and Lazarus begs and is ignored. Upon dying, Lazarus is rewarded with Heaven, while the rich man is in Hell. The audience is told to “Learn Your Lessons Well” or be faced with eternal damnation. When the rich man asks Abraham if he would send Lazarus back from the dead to warn his brothers of their impending doom, Abraham tells him no: “If they do not listen to Moses and the Prophets, they will not be convinced even if someone should rise from the dead.”

Jesus teaches that no man can serve two masters (God and money). A member of the cast tells a story of a man who spent a lifetime acquiring the good things in life, then dies before he has the time to enjoy them. This character sings “Bless the Lord,” then Jesus tells the cast not to worry about tomorrow: “Tomorrow will take care of itself. Today has problems of its own.”

In an antiphonic chorus, the cast recites the Beatitudes. Judas directs the final beatitude regarding persecution at Jesus, and Jesus quickly changes the subject (“Did I ever tell you that I used to read feet?”). However, Jesus then persuades the cast that it is “All for the Best” and heaven contains the ultimate reward as Jesus and Judas do a soft shoe together.

This is followed by the parable of the Sower of the Seeds, which Jesus tells them represent the Word of God (“All Good Gifts”).

By this point in the musical, the group has transformed from a rag-tag cast, into a community of love and caring and now march as soldiers in the military, signifying their ability to think as one. With Jesus as the drill sergeant, they perform the Parable of the Prodigal Son. The cast sings “Light of the World” about Christ’s Light and how it shines in each person.

Jesus thanks the audience for coming and announces a 10-minute intermission.

There is audience interaction during intermission. In the original production, the cast joined the audience for wine and bread. In the 2011 Broadway revival, the audience was offered wine on the stage.

The second act then opens with one or more cast members singing “Learn Your Lessons Well”, calling the audience back to their seats.

After the reprise of “Learn Your Lessons Well”, a member of the cast sings “Turn Back, O Man”, imploring mankind to give up its temporal pursuits and turn to God. Jesus then says: “This is the beginning.”

Several members of the cast then begin to question Jesus’s authority, and he responds with yet another parable. He is asked, “What is the greatest commandment?” and responds, “You shall love the Lord your God with all your heart and all your soul… And the second is like it: ‘You shall love your neighbour as yourself.'” The Pharisees continue to question him, and he laments “Alas for You” and calls them hypocrites. Members of the cast gather, join in Jesus’ song, and throw garbage at the Pharisees.

Jesus predicts that he will not be seen for quite a while, while standing at the “Wailing Wall”, and predicts great wars and famines. He reminds the cast and audience of the time of Noah and teaches that faith can calm the storm. The cast is told: “Keep awake, then. For the Son of Man will come at a time when you least expect it.”

One woman in the cast is shunned as an adulteress. Jesus says: “Let the one of you who is faultless cast the first stone.” Her accusers then bow their heads and walk away. Jesus walks over to her and asks: “Woman… where are they now? Has no one condemned you?” The woman answers: “No one, sir.” He tells her: “Then nor shall I. You may go, but do not sin again.” As she watches Jesus walk from her, she entreats him to remain “By My Side”. During this song, Judas foretells his upcoming betrayal of Jesus.

In one of the lighter moments in the second act, Jesus tells how he will separate men as a shepherd separates his flock into sheep and goats. The sheep will enter heaven while the goats must suffer eternal damnation. “We Beseech Thee” cry the goats, begging for mercy.

After the song, the cast reminds each other to take things “Day By Day”, as they remove their clown makeup, face paint, or object. They assemble for the Last Supper and Jesus tells them that one of them will betray him. Each member of the cast asks, “Is it I?” ending with Judas: “Rabbi… can you mean me?” Jesus tells him to do quickly what he must do and Judas runs off. Jesus breaks the bread, shares the wine, and tells his followers that they will dine together in the Kingdom of Heaven. The band sings “On the Willows”, which is about what has been sacrificed. In the song, Jesus says goodbye to the cast. He asks that they wait for him as he goes into the Garden of Gethsemane to pray.

In the garden, Jesus implores God to let the burden be lifted from his shoulders if there is another way. Jesus returns to his followers to find them all asleep. He begs them to stay awake, but they all fall asleep again and Jesus warns them they will all betray him three times (a reference to the apostle Peter). Jesus then prays to God that if his death cannot pass him by, then His will must be done. He is then tempted by Satan (usually played by the apostles), but orders him away.

Judas returns to betray Jesus, but has a moment where he cannot bring himself to do it. Judas finds himself boxed in by invisible walls, except for one path which leads to Jesus. Jesus encourages Judas to do what he has come to do, and Judas grabs Jesus to bring him to be crucified. The community starts to attack Judas, while Jesus tells them to stop, as all who live by the sword will one day die by it. Judas (usually alone, as a representation of the others arresting Jesus) ties Jesus upon an electric fence (representative of the cross) as Jesus berates him for arresting him at night, but then says that it had to happen to fulfill the prophets’ writings.

The “Finale” begins, loud and in B-minor, with Jesus wailing, “Oh, God, I’m bleeding,” and the community answers: “Oh, God, You’re bleeding.” Jesus dies and the music ends. The women of the cast sing “Long Live God”, and the men join in with “Prepare Ye the Way of the Lord” in counterpoint. The cast removes Jesus from the fence and carries him out, either offstage or through the aisles. The cast then finishes with a reprise of “Prepare Ye the Way of the Lord,” ending the show full of love and faith.