Jesus Christ Superstar is a 1970 rock opera with music by Andrew Lloyd Webber and lyrics by Tim Rice. The musical started as a rock opera concept album before its Broadway debut in 1971. The musical is mostly sung-through, with little spoken dialogue. The story is loosely based on the Gospels’ accounts of the last week of Jesus’s life, beginning with the preparation for the arrival of Jesus and his disciples in Jerusalem and ending with the crucifixion. It depicts political and interpersonal struggles between Judas Iscariot and Jesus that are not present in the Bible.

Judas Iscariot (Twelve Apostles), expresses his concern over Jesus’s rising popularity and the negative repercussions that will have. He criticises Jesus for accepting his followers’ views, and for not heeding his concerns (“Heaven on Their Minds”). While Judas still loves Jesus, he believes that he is just a man, not God, and worries that Jesus’s following will be seen as a threat to the Roman Empire. Judas’s warning goes unheeded, as Jesus’s followers want to go to Jerusalem with Jesus. As they ask Jesus for information about his plans for the future, Jesus will not give them any, since whatever will happen is determined by God (“What’s the Buzz?”).

Recognizing that Jesus is irritated by the lack of understanding from his followers, Mary Magdalene tries to help Jesus relax. Judas does not like this as it seems that Jesus is contradicting his own teaching, and he worries that this apparent lack of judgement will be used against Jesus and his followers (“Strange Thing Mystifying”). Jesus tells Judas that Mary is with him now, and unless Judas is without sin he should not judge the character of others. Jesus then reproaches the rest of the apostles for being “shallow, thick, and slow” and bitterly complains that not a single one of them truly cares if he comes or goes. Mary Magdalene tries to reassure Jesus while anointing him with oil (“Everything’s Alright”). Judas angrily insists that the money spent on oil could have been used to help the poor. Sadly, Jesus answers that that they simply do not have the resources to end poverty, and that they should be glad for what comforts they have, including himself; therefore, he warns him “You’ll be lost, you’ll be sorry when I’m gone.”

Meanwhile, Caiaphas, the High Priest of Israel, assembles the Pharisees together at the Sanhedrin to talk about Jesus and his disciples. According to the Pharisees, Jesus’s growing following consists of Jews unwilling to accept the Romans as their rulers, and the priests believe that Jesus may come to be seen as a threat to the Roman Empire, and to the priesthood’s integrity; if the Romans retaliate, many Jews will suffer, even those who are not following Jesus. Caiaphas then concludes that there could be great bloodshed and the stakes are “frighteningly high!”. So, for the greater good, he suggests they should “crush him completely! So like John before him, this Jesus must die!”, and the Pharisees concur upon his decision (“This Jesus Must Die”). As Jesus and his followers arrive exultantly in Jerusalem, they are confronted by Caiaphas, who demands that Jesus should postpone this parade, which Jesus says would be futile and change nothing, and he proceeds to greet the happy Israelites instead (“Hosanna”). As the crowd cheers him on, they suddenly ask, “Hey JC, JC, won’t you die for me?” To this, Jesus visibly reacts with concern. Then, one of his apostles, Simon the Zealot, suggests that Jesus lead his mob in a war against Rome and gain absolute power (“Simon Zealotes”). Jesus rejects this suggestion, stating that none of his followers understand what true power is, nor do they understand his true message (“Poor Jerusalem”).

Pontius Pilate, the governor of Judea, has had a dream, in which he meets with a Galilean (in the form of Jesus) and that he, Pilate, will receive all of the blame for the man’s violent and mournful death, predicting the rise of Christianity (“Pilate’s Dream”). Jesus arrives at the Temple in Jerusalem and finds that it has become a haven of sin and debauchery as it is being used for selling everything from usury and weapons to prostitutes and drugs; angered by this, Jesus drives everyone out (“The Temple”). Angry, disconsolate, and tired by his burden, Jesus is confronted by lepers, cripples, and beggars, all wanting to be healed. Even though he heals some, their number increases, and he is overwhelmed. Unable to solve everyone’s problems, Jesus screams “Heal yourselves!” until he finds Mary Magdalene by his side, laying him to rest (“Everything’s Alright (Reprise)”). While Jesus is asleep, Mary acknowledges that she is unconditionally in love with Jesus, unlike any man she has known before, and it frightens her (“I Don’t Know How to Love Him”).

Conflicted, Judas seeks out the Pharisees and promises to help them arrest Jesus, while belaboring that he is acting with unselfish motives and that Jesus himself would approve if he knew those motives (“Damned for All Time”). Sustaining his testimony, Caiaphas and Annas ask that Judas reveal the location of Jesus so that the authorities can apprehend him. In exchange for the information, Judas is offered thirty pieces of silver as a “fee” so that he can assuage his conscience by using the money charitably (“Blood Money”). Judas decides that it would be better to turn Jesus in before his popularity leads to the deaths of Jesus and his followers, Judas included. He reveals that on Thursday night, Jesus will be at the Garden of Gethsemane.

At The Last Supper, Jesus pours wine and passes bread for his apostles (“The Last Supper”). Aware of the ordeal he faces, he is stung when the others pay little attention to him; “For all you care this bread could be my body,” he remarks, alluding to (and anticipating) the Christian doctrine of the Eucharist. He asks them to remember him when they eat and drink; he predicts that Peter will deny him three times and that one of them will betray him. Judas, believing that Jesus already knows (“cut the dramatics, you know very well who”), admits he is the one and accuses Jesus of acting recklessly. Claiming he does not understand Jesus’s decisions, he leaves to bring the Roman soldiers.

The remaining apostles fall asleep, and Jesus retreats to the Garden of Gethsemane to pray (“Gethsemane”). He admits to God his doubts, fears, and anger; that he is tired and has done all he can. He asks powerfully if any of it has meaning and implores God not let him suffer the horrible death that portends for him. He feels disillusioned with his quest as the Messiah, does not understand what it has achieved, and wishes to give up. Receiving no answer, Jesus realises that he cannot defy God’s will, and surrenders to God. His prayer ends with a request that God take him immediately, “before I change my mind.” 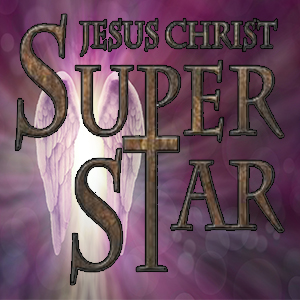 Finally, Judas arrives with Roman soldiers and i

dentifies Jesus by kissing him on the cheek (“The Arrest”). While Jesus is being arrested, his apostles attempt to fight the soldiers, Jesus tells them to let the soldiers take him to Caiaphas. On the way, a mob (acting like—and sometimes represented as—modern-day news reporters) asks Jesus what he plans to do, but Jesus declines to comment. When Jesus is brought to trial before the Sanhedrin, Caiaphas demands if he is the King of the Jews. Jesus responds: “That’s what you say, you say that I am.” This answer is affirmative according to Jewish custom, and that provides enough justification for the Pharisees to bring Jesus to Pilate. Meanwhile, Jesus’s apostle Peter is confronted by an old man, a soldier and a maid, and Peter denies to each that he knows Jesus (“Peter’s Denial”). Mary asks Peter why he denied Jesus, and Peter responds that he had to do it in order to save himself. Mary wonders how Jesus knew that Peter would deny him three times.

Later, Pilate asks Jesus if he is the King of the Jews. Jesus gives the same answer that he gave Caiaphas: “that’s what you say.”[1] Since Jesus is from Galilee, Pilate says that he is not under his jurisdiction and sends him to King Herod (“Pilate and Christ”). As Jesus is dragged away, the chorus asks where Jesus’s power has gone. The decadent and flamboyant King Herod persuades Jesus to prove his divinity by performing miracles, offering to free him if he complies (“King Herod’s Song (Try It And See)”), but Jesus ignores him. Herod decides that Jesus is just another phony messiah and angrily sends him back to Pilate. Meanwhile, Mary Magdalene, Peter, and the apostles remember when they first began following Jesus, and wish that they could return to a time of peace (“Could We Start Again, Please?”)

Later, Judas is horrified upon beholding Jesus’s harsh treatment by the authorities. Wracked with guilt, Judas expresses regret to the pharisees, fearing he will forever be remembered as a traitor. Caiaphas and Annas assure him that what he has done now will save everyone and that he should not feel remorse for his actions. Although rewarded for a job well done, Judas recognizes that God chose him to be the one to betray Jesus, and that he has been used as a pawn for the “foul bloody crime”. He curses God for manipulating him, and in a final attempt to detach himself from his destiny, he commits suicide by hanging himself from a tree (“Judas’s Death”).

At Jesus’s trial, Pilate interrogates Jesus into revealing the whereabouts of his kingdom, but was cut off by a bloodthirsty mob who demands that Jesus should be sentenced to death by crucifixion. In spite of the mob’s behavior, Pilate remembers the dream he had about the mob and the unjust execution of Jesus. Pilate tells the mob that, while Jesus should be imprisoned, he does not deserve to die. Pilate demands that the crowd give him a reason to condemn Jesus, and the mob answers that Jesus is a blasphemer and has defied the Roman Empire. However, after revealing Jesus as nothing more than a pathetic human being, Pilate calls the crowd hypocrites, as he knows they hate Roman rule. Even so, he decides to satisfy their bloodlust by having Jesus flogged, counting thirty-nine bloody strokes (“Trial Before Pilate, (Including The Thirty-Nine Lashes)”). Pilate, clearly disturbed by the whole ordeal, pleads with Jesus to defend himself, but Jesus says weakly that everything has been determined, by God, and Pilate cannot change it. More outraged by Jesus’s words, the crowd still calls for Jesus’s death, informing Pilate that he has his duty to keep the peace. Finally, he reluctantly agrees to crucify Jesus to keep the crowd from getting violent, saying to Jesus: “Don’t let me stop your great self-destruction! Die if you want to, you misguided martyr! I wash my hands of your demolition! Die if you want to, you – innocent puppet….”

As Jesus’s crucifixion awaits, he is haunted by the ghost of Judas, who taunts him and questions why Jesus chose to arrive in the manner and time that he did, and if what happened to him was really part of a divine plan, but Judas’ questions go unanswered (“Superstar”). After reciting his final words and commending his spirit to God, Jesus slowly dies on the cross (“The Crucifixion”). In the end, the Apostles and Mary, mourning the death of their fallen saviour, reflect on the impact he has had on their lives (“John Nineteen: Forty-One”).