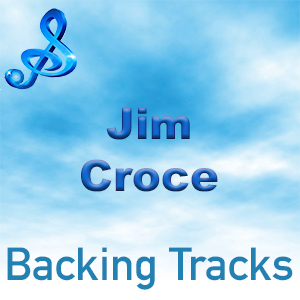 Jim Croce was an American folk singer and songwriter. He released five studio albums between 1966 and 1973, before his untimely death in 1973. His songs “Bad, Bad Leroy Brown” and “Time in a Bottle” reached No. 1 on the U.S. Billboard Hot 100 chart.   He learned to play his first song on the accordion when he was 5 and eventually taught himself to play guitar.

From the mid-1960s to early 1970s, Croce performed with his wife as a duo covering several genres, including blues, country, rock and roll, and folk. They became disillusioned with the general music scene and gave up performing although Jim Croce still wrote music. Later in the 1970 he was persuaded to write and perform music as part of a duo with Maury Muehleisen, which swiftly resulted in world tours and fame.

Jim Croce and Maury died in an aeroplane crash in 1973.

“Time In A Bottle”

If I could save time in a bottle
The first thing that I’d like to do
Is to save every day till eternity passes away
Just to spend them with you
If I could make days last forever
If words could make wishes come true
I’d save every day like a treasure and then
Again, I would spend them with you
[CHORUS]
But there never seems to be enough time
To do the things you want to do, once you find them
I’ve looked around enough to know
That you’re the one I want to go through time with
If I had a box just for wishes
And dreams that had never come true
The box would be empty, except for the memory of how
They were answered by you
[CHORUS]
Categories: Artist, Pop
Leave a Reply Cancel reply
Music Genre
Popular Artists
ABBA ALABAMA ALAN JACKSON ANDREW LLOYD WEBBER BEATLES BON JOVI BOOK OF MORMON BROOKS AND DUNN CATS CELINE DION CHILDREN'S SONG DISNEY EAGLES ELTON JOHN ELVIS PRESLEY ENGLEBERT HUMPERDINCK FRANK SINATRA GARTH BROOKS GEORGE STRAIT HYMN IRISH JIM REEVES JOHNNY CASH KENNY CHESNEY KENNY ROGERS KISS KYLIE MINOGUE LADY GAGA LEANN RIMES LES MISERABLES LONESTAR MADONNA MAMMA MIA MARIAH CAREY MATILDA MERLE HAGGARD MICHAEL BUBLE MICHAEL JACKSON NAT KING COLE PINK PURCELL ROBBIE WILLIAMS TAYLOR SWIFT TIM MCGRAW TRADITIONAL