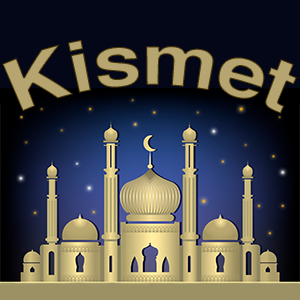 Kismet – a classic musical based on the play by Edward Knoblock.

Hajj the beggar escapes the clutches of a vengeful bandit, drowns the evil Wazir of Police, catches the eye of the Wazir’s voluptuous wife, serves as Emir of Baghdad, and sees his daughter wed to the handsome Caliph.

Kismet is set in one day (and one morning). We follow Michael’s character, a poet in ancient Baghdad, who tries to earn his and his grown-up daughter’s living by selling poems to people walking by. That’s not a very profitable business as you can imagine. So when the opportunity arises he assumes the identity of Hadjj the beggar (more profitable by far).

It turns out that said beggar once cursed the evil Jawan who then lost his son and now, as he feels death approaching, searches for Hadjj the beggar to remove the curse and retrieve the missing son. Our poet has no idea about all that but seeing Jawan will have him killed if he doesn’t cooperate, he claims to have those magical powers and promises him (for an adequate sum) that Jawan will find his son this very day. The Poet is allowed to live and rewarded with a small fortune. Most of this he gives to his daughter (Marsinah), so she can buy all that her heart desires. While she does so on her own, the Caliph sees her and falls in love with her on the very first sight. He is dressed like an ordinary man, despite being the most powerful man in the country, the head of state. He follows Marsinah into the garden of a house she wants to buy and she falls in love with him, too.

While the life of his daughter takes this massive turn, our poet enjoys a bit of TLC by his newly bought slaves (three ladies) when he is mistakenly arrested for a crime he didn’t commit and brought in front of the court of the Wazir of Baghdad. A Wazir is the (political) advisor of the Caliph, so he is the second man in the state. Sadly this one isn’t exactly sweet-tempered and orders the Poet’s hand to be cut off for being a thieve. Luckily for our hero the cunning wife of the Wazir likes his looks and sets her mind on getting him out of there in one piece…she seems to be able to imagine more enjoyable uses for his right hand than it being cut off just like that.

The court case is still going strong when it’s interrupted by the head of police with the news that the infamous murderer and thief Jawan has finally been caught. They bring him in and he identifies the Poet as the man who claimed to be a wizard and whom had promised him that he’d find his long lost sun on this very day. Things do not exactly look rosy until Jawan sees the Wazir is wearing an amulet he had given him when he was still a child. He has found his son!

The Wazir now believes in the Poet’s magical abilities and decides a man like this will be very useful when he is on his side. He commands his wife to keep him entertained. She doesn’t need to be told twice, as she is quite keen on having the handsome poet to herself. She knows perfectly well he is no wizard, but if it serves the purpose of keeping him in the palace, so be it.

The Wazir is in desperate need for money, so he wants the Caliph to marry the three princesses of a neighbouring country to seal a deal with their father. He urges the The Poet-cum-Beggar-cum-Wizard to prevent this marriage and as a reward he will make him an Emir (a high ranking noble man). The Poet accepts and hopes that the young lovers will fall out eventually. He has absolutely no idea that the future happiness of his daughter is at stake. The Wazir threatens to execute him should the Caliph indeed marry this mystery girl he met on the street.

Things get more and more complicated by the minute but in the last scene the Poet manages to unite Marisnah and the Caliph (by actually killing the Wazir, who had meanwhile faked a marriage to Marsinah so the Caliph cannot have her and wanted to poison her the next night so that she cannot reveal the truth) and is in turn allowed to spend the rest of his days with the Wazir’s merry widow Lalume. All’s well that ends well.