La Cage aux Folles is a musical with a book by Harvey Fierstein and lyrics and music by Jerry Herman. Based on the 1973 French play of the same name by Jean Poiret, it focuses on a gay couple: Georges, the manager of a Saint-Tropez nightclub featuring dragentertainment, and Albin, his romantic partner and star attraction, and the farcical adventures that ensue when Georges’s son, Jean-Michel, brings home his fiancée’s ultra-conservative parents to meet them. La cage aux folles literally means “the cage of mad women”. However, folles is also a slang term for effeminate homosexuals (queens)

Georges, the master of ceremonies, welcomes the audience to his St. Tropez drag nightclub, “La Cage aux Folles”. The chorus line known as Les Cagelles appear and introduce themselves to the audience (“We Are What We Are”). Georges and his “wife”, Albin, have lived happily together for many years in an apartment above La Cage with their “maid” Jacob. Albin is a drag queen and the star performer of La Cage aux Folles under the alias of “Zaza”.

As Albin prepares to perform (“[A Little More] Mascara”), Georges’s 24-year-old son Jean-Michel (the offspring of a confused, youthful liaison with a woman named Sybil) arrives home with the news that he is engaged to Anne Dindon. Georges is reluctant to approve of Jean-Michel’s engagement, but Jean-Michel assures his father that he is in love with Anne (“With Anne on My Arm”). Unfortunately, her father is head of the “Tradition, Family and Morality Party”, whose stated goal is to close the local drag clubs. Anne’s parents want to meet their daughter’s future in-laws. Jean-Michel has lied to his fiancée, describing Georges as a retired diplomat. Jean-Michel pleads with Georges to tell Albin to absent himself (and his flamboyant behaviors) for the visit – and for Georges to redecorate the apartment in a more subdued fashion. Jean-Michel also asks Georges to invite Sybil, who has barely seen him since his birth, to dinner in Albin’s stead. Albin returns from the show to greet his son when Georges suggests that they take a walk (“With You on My Arm”) 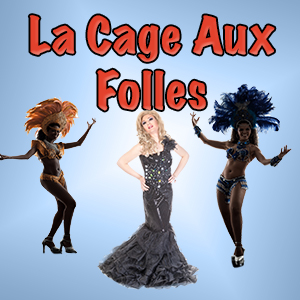 Georges takes Albin to the Promenade Café, owned by Monsieur and Madame Renaud, where he attempts to soften Albin’s emotions before telling him of Jean-Michel’s request (“Song on the Sand”). Before Georges can break the news to him, Albin suggests that they hurry back to La Cage to make it in time for the next show. They arrive in time and Albin takes the stage once more as Zaza (“La Cage aux Folles”). While Albin is performing, Georges and Jean-Michel quickly redecorate th

e house. While Albin is changing for his next number, he notices the two carrying his gowns and demands to know what is going on. Georges finally tells Albin of Jean-Michel’s plan and expects Albin to explode with fury, but he remains silent. Albin then re-joins Les Cagelles onstage, tells them to leave, and begins to sing alone in defiance of Jean-Michel, stating that he is proud of who he is and refuses to change for anyone (“I Am What I Am”). He throws his wig at Georges and departs in a huff.

The next morning, Georges finds Albin at the Promenade Café after his abrupt departure and apologizes (“Song on the Sand [Reprise]”). He then suggests to Albin that he dress up for dinner as macho “Uncle Al”. Albin is still upset, but reluctantly agrees to act like a heterosexual for Jean-Michel. With the help of Monsieur and Madame Renaud, Georges successfully teaches Albin to abandon his flamboyancy (“Masculinity”). Back at the chastely redesigned apartment, Georges shows “Uncle Al” to Jean-Michel. Jean-Michel doesn’t like the idea and expresses his dislike for Albin’s lifestyle. Georges angrily reminds Jean-Michel of how good of a “mother” Albin has been to him (“Look Over There”). They then receive a telegram that Jean-Michel’s mother Sybil is not coming and Anne’s parents arrive (“Dishes [Cocktail Counterpoint]”). Hoping to save the day, Albin appears as Jean-Michel’s buxom, forty-year-old mother, in pearls and sensible shoes. The nervous Jacob burns the dinner, so a trip to a local restaurant, “Chez Jacqueline”, belonging to an old friend of Albin and Georges, is quickly arranged. No one has told Jacqueline of the situation, and she asks Albin (as Zaza) for a song, to which he hesitantly agrees (“The Best of Times”). Everyone in the restaurant begins to take part in the song, causing Albin to yield to the frenzy of performance and tear off his wig at the song’s climax, revealing his true identity.

Back at the apartment, the Dindons plead with their daughter to abandon her fiancé, for they are appalled by his homosexual parents, but she is in love with Jean-Michel and refuses to leave him. Jean-Michel, deeply ashamed of the way he has treated Albin, asks his forgiveness (“Look Over There [Reprise]”), which is lovingly granted. The Dindons prepare to depart, but their way is blocked by Jacqueline, who has arrived with the press, ready to photograph the notorious anti-homosexual activists with Zaza. Georges and Albin have a proposal: If Anne and Jean-Michel may marry, Georges will help the Dindons escape through La Cage downstairs. Georges bids the audience farewell while Les Cagelles prepare the Dindons for the grand finale (“La Cage aux Folles [Reprise]”). Georges then introduces the Dindons, dressed in drag as members of the nightclub’s revue, and they escape the paparazzi with Jean-Michel and Anne behind them. With everyone gone, Albin enters and he and Georges briefly sing of their love for each other before sharing a kiss (“Finale [With You On My Arm/La Cage aux Folles/Song on the Sand/The Best Of Times]”).