Legally Blonde is a musical with music and lyrics by Laurence O’Keefe and Nell Benjamin and book by Heather Hach. The story is based on the novel Legally Blonde by Amanda Brown and the 2001 film of the same name.

It tells the story of Elle Woods, a sorority girl who enrolls at Harvard Law School to win back her ex-boyfriend Warner. She discovers how her knowledge of the law can help others, and successfully defends exercise queen Brooke Wyndham in a murder trial. Throughout the show, no one has faith in Elle Woods, but she manages to surprise them when she defies expectations while staying true to herself.

The overjoyed girls of UCLA’s sorority Delta Nu, led by Margot, Serena, and Pilar, celebrate the engagement that is expected to happen that night of Warner Huntington III to their perky, sweet, and strikingly blonde sorority president, Elle Woods, who is fretting over finding the perfect dress for the occasion (“Omigod You Guys”). Once she acquires her dream dress, Elle goes to dinner with Warner, where he tells her that he needs someone more serious and breaks up with her (“Serious”). Elle is devastated and sulks for twelve days (“Daughter Of Delta Nu”) but decides to chase Warner to Harvard Law School to show him that she can be serious. With help from Delta Nu sister Kate, Elle studies for the LSAT. Instead of writing a personal essay, Elle bursts into the Harvard admission offices backed by a squad of cheerleaders. She is accepted after revealing she is motivated by love (“What You Want”).

Elle’s snobby classmates disapprove of her attire, and the only person who is willing to help her is law-teaching assistant Emmett Forrest (“The Harvard Variations”). However, he can’t protect her in class from the bloodthirsty Professor Callahan (“Blood In The Water”). Callahan kicks the under-prepared Elle out of class at the suggestion of her classmate Vivienne Kensington, who happens to be Warner’s new girlfriend. This “tragedy” summons the apparitions of the sisters of Delta Nu, who, acting as a Greek Chorus visible and audible only to Elle, encourage her to stay positive (“Positive”). Elle, believing that being blonde is the problem, decides to become a brunette. She heads to the Hair Affair salon where she meets the spunky beautician Paulette, who, after talking Elle out of her hair-dye plan, tells Elle that when she is down, she puts on her favorite CD, Celtic Moods, and dreams of Ireland and her dream Irishman (“Ireland”). At the salon, Vivienne gives Elle an unexpected invitation to a costume party. Paulette sends Elle off with a costume for the party with lyrics of encouragement (“Ireland (Reprise)”). 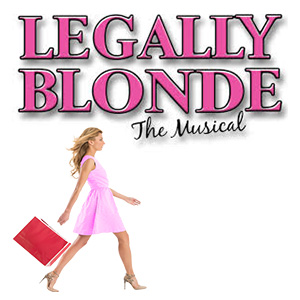 Walking into the party as a Playboy Bunny, Elle soon realizes that she was tricked by Vivienne: the party wasn’t a costume party. Despite this, she still seeks out Warner in an effort to win him back, but he remains unimpressed (“Serious (Reprise)”). Elle runs from the party, only to meet Emmett, who struggles to understand Elle’s love problems. He has Elle assess her priorities until she realizes it is her obsession with Warner that keeps her from earning his respect (“Chip On My Shoulder”). Freed from her need to please Warner, she defeats him in a classroom debate. Elle then helps Paulette get her dog back from Paulette’s ex-boyfriend, using legal jargon and demonstrating she is beginning to understand law. Along with Enid Hoopes, Warner and Vivienne win two of Callahan’s coveted internship positions, and Warner proposes to Vivienne on the spot right in front of Elle. Vivienne accepts with a kiss. Elle is devastated, but Emmett shows her the internship list, revealing Elle got an internship position as well. Elle, overjoyed, celebrates, disses Warner, calls her mother to tell her the news, and eagerly anticipates the trial (“So Much Better”).

Act Two begins with fitness queen Brooke Wyndham and her fitness team’s workout video, which is being viewed by Elle, Callahan, Emmett, Vivienne, Warner, and Enid (“Whipped Into Shape”). Callahan tells the legal team that Brooke is accused of murdering her billionaire husband. At the jail, the legal team are unable to get Brooke to tell them her alibi and she refuses to plead guilty. Upon learning that they were both Delta Nu sisters, Brooke then privately tells Elle her alibi: Brooke was getting liposuction, which, if the public finds out, could destroy her fitness empire. She makes Elle promise not to tell anyone (“Delta Nu Nu Nu”). Because of Elle’s loyalty to her client and refusal to state the alibi, Elle, and consequently Emmett, are shunned by the group. To cheer Emmett up and to increase his chances of impressing Callahan, Elle gives him a makeover (“Take It Like A Man”).

Back at the Hair Affair, Elle is getting a manicure when Kyle, a sexy UPS courier, walks into the salon to deliver a package to Paulette, leaving her in complete awe, but her low self-confidence prevents her from making a move. When he leaves, Pilar, Serena, and Margot are summoned by Paulette’s amazing “Bend and Snap” when picking up the package. The sorority girls tell Paulette to use the “Bend and Snap” dance move on Kyle to turn him on, but when she does, she accidentally breaks his nose (“Bend and Snap”).

At the trial, Brooke’s pool boy Nikos claims to have been having an affair with Brooke, giving her a motive for murdering her husband. After doing the Bend and Snap in front of Nikos and getting no response, Elle suspects that Nikos is gay although Callahan and her teammates are not convinced. Her colleagues posit that his perceived flamboyance might just be a cultural difference as Nikos is European. Emmet successfully makes Nikos slip and state that his boyfriend’s name is Carlos, though Nikos claims that he misunderstood “boyfriend” for “best friend”. Carlos, fed up with the closeted nature of his boyfriend, appears from the gallery and proclaims Nikos’s homosexuality. Nikos confesses that he is indeed gay and European (“There! Right There! (Gay or European?)”).

Later that night in Callahan’s office, the interns celebrate Elle’s skill. Warner finds problems with calling a finely tuned awareness of homosexuality a legal victory. Callahan, annoyed with Warner’s behavior, sends Warner out of the room to fetch a coffee. Callahan dismisses Emmett and the other interns but requests Elle to remain for a few moments. Callahan forcibly kisses Elle, who slaps him. In turn, Callahan fires her. Warner and Vivienne both see the kiss through the door of the room. Warner turns away in anger, leaving Vivienne to be the only one to witness the slap. After Callahan leaves, Warner re-enters the office and mocks Elle, but Vivienne tells him to shut up and they both leave. A defeated Elle prepares to go home, despite Emmett asking her to stay, finally realizing that he is in love with her (“Legally Blonde”).

Elle heads to the Hair Affair to say goodbye to Paulette, but before she can leave, Vivienne and Enid convince Elle otherwise. Elle discards her lawyerly navy suit, dons a pink dress and leads a parade back to the courtroom. They meet Kyle on the way, who has taken a liking to Paulette, and reveals himself to be Irish, prompting everyone present to Irish Dance. Back at the trial, Brooke fires Callahan and hires Elle (“Legally Blonde Remix”). Brooke’s stepdaughter Chutney goes to the witness stand and her testimony is damning, stating after she got out of the shower she saw Brooke covered in her father’s blood. After Chutney states she received a perm the day of the murder, Elle realizes a flaw in Chutney’s alibi and suggests that the entire court should be moved to the scene of the crime – the bathroom where the murder took place (“Scene of the Crime”). As a demonstration, Elle asks Paulette to give Enid a perm, and asks Enid to step into the shower upon entering the crime scene. Relying on her knowledge of hair maintenance, Elle’s demonstration is successful as Enid walks out of the shower with completely flattened hair—revealing that Chutney could not have possibly showered immediately after getting a perm because her perm was still intact. Under Elle’s intense questioning, Chutney confesses that she killed her father, thinking that it was Brooke (“Omigod You Guys (Reprise)”). Chutney is arrested and Brooke is set free.

Warner proposes to Elle, having been dumped by Vivienne. Elle gently refuses, claiming to have been changed by the experience. Three years later, Elle ends up as the valedictorian of her class. Paulette tells the audience that Elle is not one to brag about her valedictorian status, so she decided to allow Paulette to play “Where Are They Now” during her speech. Paulette says that Enid practices family law, Vivienne is training for the Peace Corps, and Warner dropped out to pursue a modeling career. Callahan ran for governor but was defeated, and his wife hired Emmett to handle their divorce. Paulette married Kyle, had two kids, and is pregnant with a third. They live in Worcester, Massachusetts and Paulette bought a new salon (the Worcester detail was taken from the London script, and replaced with the detail that a child of hers was named Seamus) (“Find My Way”). At the end of the graduation, Elle proposes to Emmett, and Emmett accepts (“Finale”).