Mame is a musical with the book by Jerome Lawrence and Robert Edwin Lee and music and lyrics by Jerry Herman.   In 1958, a film titled Auntie Mame, released by Warner Brothers, starring Rosalind Russell. It was nominated for an Academy Award and won a Golden Globe for her portrayal.   The musical opened on Broadway in 1966, starring Angela Lansbury and Bea Arthur.

The madcap life of eccentric Mame Dennis and her bohemian, intellectual arty clique is disrupted when her deceased brother’s 10-year-old son Patrick is entrusted to her care. Rather than bow to convention, Mame introduces the boy to her free-wheeling lifestyle, instilling in him her favorite credo, “Life is a banquet, and most poor sons-of-bitches are starving to death.” Figuring in the storyline are Agnes Gooch (Mame’s personal secretary and nanny-in-law), Vera Charles (her “bosom buddy” baritone actress and world’s greatest lush) and Dwight Babcock (the stuffy and officious executor of her brother’s estate). Mame loses her fortu

ne in the Wall Street Crash of 1929 and tries her hand at a number of jobs with comically disastrous results but perseveres with good humor and an irrepressible sense of style. 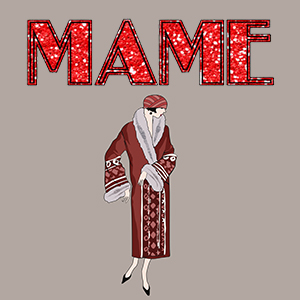 Mame then meets and marries Beauregard Jackson Pickett Burnside, a Southern aristocrat with a Georgia plantation called Peckerwood. The trustees of Patrick’s father force Mame to send Patrick off to boarding school (the fictional St Boniface, in Massachusetts), and Mame and Beau travel the world on an endless honeymoon that stops when Beau falls to his death while mountain climbing. Mame returns home a wealthy widow to discover that Patrick has become a snob engaged to an equally priggish debutante, Gloria Upson, from a bigoted family. Mame brings Patrick to his senses just in time to introduce him to the woman who will eventually become his wife, Pegeen Ryan. As the story ends, Mame is preparing to take Patrick’s young son, Peter, to India with her usual flair.