Man of La Mancha is a 1965 musical with a book by Dale Wasserman, lyrics by Joe Darion, and music by Mitch Leigh, inspired by Miguel de Cervantes and his 17th-century novel Don Quixote. .  The original 1965 Broadway production  five Tony Awards, including Best Musical.

In the late sixteenth century, failed author-soldier-actor and tax collector Miguel de Cervantes has been thrown into a dungeon by the Spanish Inquisition, along with his manservant. They have been charged with foreclosing on a monastery. Their fellow prisoners attack them, eager to steal the contents of the large trunk Cervantes has brought with him. However, a sympathetic criminal known as “the Governor” suggests setting up a mock trial instead. Only if Cervantes is found guilty will he have to hand over his possessions. A cynical prisoner, known as “the Duke,” charges Cervantes with being an idealist and a bad poet. Cervantes pleads guilty, but then asks if he may offer a defense, in the form of a play, acted out by him and all the prisoners. The “Governor” agrees.

Cervantes takes out a makeup kit and costume from his trunk, and transforms himself into Alonso Quijano, an old gentleman who has read so many books of chivalry and thought so much about injustice that he has lost his mind and set out as a knight-errant. Quijano renames himself Don Quixote de La Mancha, and goes off to find adventures with his “squire”, Sancho Panza. (“Man of La Mancha (I, Don Quixote)”)

Don Quixote warns Sancho that they are always in danger of being attacked by Quixote’s mortal enemy, an evil magician known as the Enchanter. Suddenly he spots a windmill, mistakes it for a four-armed giant, attacks it, and receives a beating from the encounter. Quijote decides that he lost the battle because he was never properly knighted. He then mistakes a rundown inn for a castle and orders Sancho to announce their arrival by blowing his bugle.

Cervantes talks some prisoners into assuming the roles of the inn’s serving wench and part-time prostitute Aldonza, and a group of muleteers who are propositioning her. Aldonza fends them off sarcastically (“It’s All The Same”), but eventually deigns to accept their leader, Pedro, who pays in advance.

Don Quixote enters with Sancho, asking for the lord of the castle. The Innkeeper (played by The Governor) humors Don Quixote as best he can. Quixote sees Aldonza and declares that she is his lady, Dulcinea, to whom he has sworn eternal loyalty (“Dulcinea”). Aldonza, used to rough treatment, is first flabbergasted and then annoyed at Quixote’s kindness, and is further aggravated when the Muleteers turn Quixote’s tender ballad into a mocking serenade.

Meanwhile, Antonia, Don Quixote’s niece, has gone with Quixote’s housekeeper to seek advice from the local priest, who realizes that the two women are more concerned with the embarrassment Quixote’s madness may bring them, than with his actual welfare (“I’m Only Thinking of Him”).

Cervantes chooses “the Duke” to play Dr. Sanson Carrasco, Antonia’s fiancé, a man just as cynical and self-centered as the prisoner who is playing him. Carrasco is upset at the idea of marrying into the family of a madman, but the priest convinces Carrasco that it would be a worthy challenge to use his abilities to cure his prospective uncle-in-law. Carrasco and the priest set out to bring Don Quixote back home (“I’m Only Thinking of Him [Reprise]”).

Back at the inn, Sancho delivers a missive from Don Quixote to Aldonza courting her favor and asking for a token of her esteem. Aldonza provides the requested token: an old dishrag. She asks Sancho why he follows Quixote, but he can come up with no explanation other than “I Really Like Him”. Alone, Aldonza ponders Quixote’s behavior and her inability to laugh at him (“What Do You Want of Me?”) In the courtyard, the muleteers once again taunt Aldonza with a suggestive song (“Little Bird, Little Bird”). Pedro makes arrangements with her for an assignation later.

The priest and Dr. Carrasco arrive, but cannot reason with Don Quixote. Quixote becomes distracted by a barber who passes by the inn, wearing his shaving basin on his head to ward off the sun’s heat (“The Barber’s Song”). Quixote threatens the barber with a sword and snatches the basin, declaring it is the “Golden Helmet of Mambrino”, which makes its wearer invulnerable. Dr. Carrasco and the priest leave, with the priest impressed by Don Quixote’s view of life and wondering if curing him is really worthwhile (“To Each His Dulcinea”).

Quixote still wishes to be officially dubbed a knight: he plans to stand vigil all night over his armor in the inn’s courtyard, and then have the Innkeeper (whom he mistakes for a nobleman) grant him knighthood the following morning. Aldonza encounters Quixote in the courtyard and confronts him; Quixote does his best to explain the ideals he follows and the quest he is on (“The Impossible Dream”). Pedro enters, furious at being kept waiting, and slaps Aldonza. Enraged, Don Quixote takes him and all the other muleteers on in a fight (“The Combat”). Don Quixote has no martial skill, but by luck and determination – and with the help of Aldonza and Sancho – he prevails, and the muleteers are all knocked unconscious. But the noise attracts the attention of the Innkeeper, who tells Quixote that he must leave. Quixote apologizes for the trouble but reminds the Innkeeper of his promise to dub him knight. The Innkeeper does so (“Knight of the Woeful Countenance”).

Quixote then declares that he must comfort the wounded muleteers, because chivalry requires kindness to one’s enemies. Aldonza, impressed, says that she will help the muleteers instead. But when she comes to them with bandages, they beat her, rape her, and carry her off (“The Abduction”). Quixote, unaware of this, contemplates his recent victory and new knighthood (“The Impossible Dream” – first reprise).

At this point, the Don Quixote play is brutally interrupted when the Inquisition enters the dungeon and drags off an unwilling prisoner to be tried. The Duke taunts Cervantes for his look of fear, and accuses him of not facing reality. This prompts Cervantes to passionately defend his idealism.

The Don Quixote play resumes (“Man of La Mancha” – first reprise). Quixote and Sancho have left the inn and encounter a band of Gypsies (“Moorish Dance”) who take advantage of Quixote’s naiveté and steal everything they own, including Quixote’s horse Rocinante and Sancho’s donkey Dapple. [25] Quixote and Sancho are forced to return to the inn. Aldonza also shows up at the inn, bruised and ashamed. Quixote swears to avenge her, but she tells him off, flinging her real, pitiful history in his face and blaming him for allowing her a glimpse of a life she can never have. She begs him to see her as she really is but Quixote can only see her as his Dulcinea (“Aldonza”). 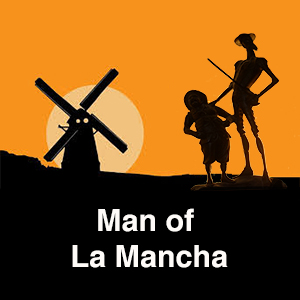 Cervantes announces that the story is finished, but the prisoners are dissatisfied with the ending. They prepare to burn his manuscript when he asks for the chance to present one last scene. The governor agrees.

Quixote is back at home, and has fallen into a coma. Sancho tries to cheer him up (“A Little Gossip”), and Alonso opens his eyes. He is now sane: he gives his name as Alonso Quijano and thinks his knightly career was just a dream. However, he feels close to death, and asks the priest to help him make out his will. Aldonza suddenly forces her way into the room. She has come to visit Quixote because she can no longer bear to be anyone but Dulcinea. When he does not recognize her, she sings a reprise of “Dulcinea” and tries to help him remember the words of “The Impossible Dream.” Suddenly, he remembers everything and rises from his bed, calling for his armor and sword so that he may set out again (“Man of La Mancha” – second reprise). But it is too late – in mid-song, he cries out and falls dead. The priest sings “The Psalm” (Psalm 130 in Latin) for the dead. Sancho is distraught at his friend’s death. Aldonza tries to comfort him, saying that Alonso Quijano may be dead but Don Quixote lives on. When Sancho addresses her as Aldonza, she replies, “My name is Dulcinea.”

The Inquisition enters to take Cervantes to his trial, and the prisoners, finding him not guilty, return his manuscript. It is his (as yet) unfinished novel, Don Quixote. As Cervantes and his servant mount the staircase to go to their impending trial, the prisoners, led by the girl who played Dulcinea, sing “The Impossible Dream” in chorus.