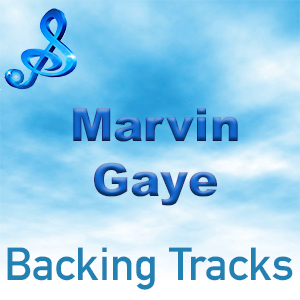 Marvin Gaye Backing Tracks: Heard It Through The Grapevine … How Sweet It Is … It Takes Two … Sexual Healing … Ain’t No Mountain

As one of the pioneers of Motown, singer-songwriter and producer Marvin Gaye helped shape the sound of R & B music and is considered one of the greatest artists of all time.

Marvin Pentz Gay, Jr. was born on April 2, 1939 in Washington D.C. to Marvin Gay, Sr., a preacher, and Alberta Gay, a housewife and schoolteacher. The middle child of three children, Marvin Gaye’s childhood can be characterized by developing an early love of music in the face of an abusive relationship with his father. Marvin Gaye’s introduction to music began by singing in his father’s church choir when he was only three years old. He expanded his musical abilities by learning how to play the piano and drums.

Marvin Gaye then caught the attention of Barry Gordy Jr. during a Motown Christmas party where Gaye played the piano. Gordy signed him to Motown Records in 1961.

Gaye’s career began slowly with Motown, working as a session drummer while trying to build a solo career. Even though Marvin Gaye struggled with creative differences with Motown Records, he steadily churned out chart topping hits.

Turmoil surrounded Marvin Gaye’s life from the late 1970’s into the 1980’s. He moved to Hawaii when his second marriage failed, and continued his battle with drug addiction. He then relocated to Europe to escape tax problems with the IRS.

The last two years of Marvin Gaye’s life were filled with a combination of successful music and increasing drug problems. He signed with Columbia Records in 1982 and released Midnight Love. It included the hit “Sexual Healing” which earned him his only Grammy Award and topped the charts in the United States, Canada, New Zealand and the United Kingdom. Then in 1983 he reconciled with Barry Gordy on a televised appearance celebrating Motown’s 50th anniversary. His last public appearance was in 1983 when he sang his memorable rendition of “The Star Spangled Banner” at the NBA All-Star game.

Cocaine addiction forced Marvin Gaye to move in with his parents to try to straighten out his life. His strained relationship with his father, though, led him to sink even deeper into depression and thoughts of suicide. During an intense argument on April 1, 1984, Marvin Gaye was shot in the head by his father, only hours before his 45th birthday. Claiming self-defense, Marvin Gay Sr. plead no contest to voluntary manslaughter. He was cremated and his ashes were scattered across the Pacific Ocean.

The magnitude of Marvin Gaye’s influence on R&B and soul music was recognized when he was inducted into the Rock and Roll Hall of Fame in 1987. His music continues to influence and inspire singers and songwriters today.