In April 1975 at “Dreamland,” a sleazy Vietnamese club, shortly before the Fall of Saigon, it is Kim’s first day as a bargirl. The seventeen-year-old orphan is greeted by the Engineer, a French-Vietnamese man who owns the club. Backstage, the girls ready themselves for the night’s show, jeering at Kim’s naïveté (“Overture”). The U.S. Marines, aware that they will be leaving Vietnam soon, party with the Vietnamese prostitutes at the club (“The Heat Is On in Saigon”). Chris Scott, a sergeant disenchanted by the club scene, is encouraged by his friend John Thomas to go with a girl. The girls compete for the title of “Miss Saigon,” and the winner is raffled to a Marine. Kim’s innocence strikes Chris. Gigi Van Tranh wins the crown for the evening and begs the marine who won the raffle to take her back to America, annoying him. The showgirls reflect on their dreams of a better life (“Movie In My Mind”). John buys a room from the Engineer for the virgin Kim and Chris (“The Transaction”). Kim is reluctant and shy, but dances with Chris. Chris tries to pay her to leave the nightclub. When the Engineer interferes, thinking that Chris does not like Kim, Chris allows himself to be led to her room (“The Dance”).

Chris, watching Kim sleep, asks God why he met her just as he was about to leave Vietnam (“Why, God, Why?”). When Kim wakes up, Chris tries to give her money, but she refuses, saying that it is her first time sleeping with a man (“This Money’s Yours”). Touched to learn that Kim is an orphan, Chris tells her that she need not sell herself at the club, because he wants her to stay with him. The two pledge their love for each other (“Sun and Moon”). Chris tells John that he is taking leave to spend time with Kim. John warns him that the Viet Cong will soon take Saigon, but then reluctantly agrees to cover for Chris (“The Telephone Song”). Chris meets with the Engineer to trade for Kim, but the Engineer tries to include an America visa in the deal. Chris forces the Engineer at gunpoint to honour the original arrangement for Kim (“The Deal”).

The bargirls hold a “wedding ceremony” for Chris and Kim (“Dju Vui Vai”), with Gigi toasting Kim as the “real” Miss Saigon. Thuy, Kim’s cousin, to whom she was betrothed at thirteen, arrives to take her home. He has become an officer in the North Vietnamese Army and is angered to find her with Chris (“Thuy’s Arrival”). The two men confront each other, drawing their guns. Kim tells Thuy that their arranged marriage is now nullified because her parents are dead, and she no longer harbours any feelings for him because of his betrayal. Thuy curses them all and storms out (“What’s This I Find”). Chris promises to take Kim with him when he leaves Vietnam. Chris and Kim dance to the same song as on their first night (“Last Night of The World”).

Three years pass, and in Saigon (now renamed Ho Chi Minh City), a street parade is taking place to celebrate the third anniversary of the reunification of Vietnam and the defeat of the Americans (“Morning of The Dragon,” also called “The Fall of Saigon”). Thuy, a commissar in the new government, has ordered his soldiers to find the still-corrupt Engineer. Thuy orders the Engineer to find Kim and bring her to him. Kim is still in love with Chris and has been hiding in an impoverished area believing that Chris will come back to Vietnam to rescue her. Meanwhile, Chris is in bed with his new American wife, Ellen, when he wakes from a dream shouting Kim’s name. Ellen and Kim both swear their devotion to Chris from opposite ends of the world (“I Still Believe”). 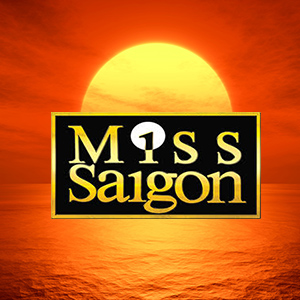 The Engineer finds Kim and brings Thuy to her. Kim refuses Thuy’s renewed offer of marriage and introduces him to Tam, her three-year-old son fathered by Chris. Thuy calls Kim a traitor and Tam an enemy, and moves to kill Tam with a knife. Kim pulls out Chris’s gun and kills Thuy (“You Will Not Touch Him”). Kim flees with Tam (“This Is the Hour”) and tells the Engineer what she has done (“If You Want to Die in Bed”). The Engineer refuses to help her until he learns that Tam’s father is American (“Let Me See His Western Nose”) – thinking this is his passport to the United States. He tells Kim that now he is the boy’s uncle, and he will lead them to Bangkok. The three set out on a ship with other refugees (“I’d Give My Life for You”).

In Atlanta, Georgia, John now works for an aide organisation whose mission is to connect Bui-Doi (from Vietnamese trẻ bụi đời “street children,” incorrectly understood as meaning children conceived during the war) with their American fathers (“Bui Doi”). John tells Chris that Kim is still alive, which Chris is relieved to hear after years of having nightmares of her dying. He also tells Chris about Tam and urges Chris to go to Bangkok with Ellen. Chris finally tells Ellen about Kim and Tam (“The Revelation”). In Bangkok, the Engineer is hawking a sleazy club where Kim works as a dancer (“What A Waste”). Chris, Ellen, and John arrive in search of Kim. John finds Kim dancing at the club, and tells her that Chris is also in Bangkok. He then tries to tell her that Chris is remarried, but Kim interrupts. She is thrilled about the news and tells Tam that his father has arrived, believing that they are to go to America with Chris. Seeing Kim happy, John cannot bring himself to break the news to her, but promises to bring Chris to her (“Please”).

The Engineer tells Kim to find Chris herself, because he doubts that Chris will come (“Chris Is Here”). Kim is haunted by the ghost of Thuy, who taunts Kim, claiming that Chris will betray her as he did the night Saigon fell. Kim suffers a horrible flashback to that night (“Kim’s Nightmare”).

In the nightmare/flashback, Kim remembers the Viet Cong approaching Saigon. As the city becomes increasingly chaotic, Chris is called to the embassy and leaves his gun with Kim, telling her to pack. When Chris enters the embassy, the gates close, as orders arrive from Washington for an immediate evacuation of the remaining Americans. The Ambassador orders that no more Vietnamese be allowed into the Embassy. Kim reaches the gates of the Embassy, one of a mob of terrified Vietnamese trying to enter. Chris calls to Kim and is about to go into the crowd to look for her, but John is eventually forced to punch Chris in the face to stop him from leaving. Chris is put into the last helicopter leaving Saigon as Kim watches from outside, still pledging her love to him (“The Fall of Saigon”).

Back in 1978 Bangkok, Kim joyfully dresses in her wedding clothes (“Sun and Moon: Reprise”) and leaves the Engineer to watch Tam while she is gone. She goes to Chris’s hotel room, where she finds Ellen. Kim mistakenly thinks that Ellen is John’s wife, but Ellen reveals that she is Chris’s wife. Kim is heartbroken and refuses to believe Ellen. Ellen asks Kim if Chris is the father of Tam, and Kim says that he is. Kim says that she does not want her son to live on the streets as a rat, but Ellen tells Kim that they will do what they can to support him. Kim pleads to Ellen that they take Tam with them to America, but Ellen refuses, saying that Tam needs his real mother, and Ellen wants her own children with Chris. Kim angrily demands that Chris tell her these things in person, and runs out of the room (“Room 317”). Ellen feels bad for Kim, but is determined to keep Chris (“Now That I’ve Seen Her”). Chris and John return, having failed to find Kim. Ellen tells them both that Kim arrived and that she had to tell Kim everything. Chris and John blame themselves, realising that they were gone too long. Ellen also tells them that Kim wants to see Chris at her place, and that she tried to give away her son to them. John realises that Kim wants Tam to be “an American boy.” Ellen then issues an ultimatum to Chris: Kim or she. Chris reassures Ellen, and they pledge their love for each other. Chris will leave Tam and Kim in Bangkok but offer them monetary support from America. John warns that Kim will not find it acceptable to have Tam stay in Thailand (“The Confrontation”). Back at the club, Kim lies to the Engineer that they are still going to America (“Paper Dragons”). The Engineer imagines the extravagant new life that he will lead in America (“The American Dream”). Chris, John, and Ellen find the Engineer and he takes them to see Kim and Tam.

In her room, Kim tells Tam that he should be happy because he now has a father. She tells him that she cannot go with him but will be watching over him (“This Is the Hour (Reprise)”). Chris, Ellen, John, and the Engineer arrive just outside her room. The Engineer comes in to take Tam outside to introduce Tam to his father. While this is happening, Kim steps behind a curtain and shoots herself. As she falls to the floor, everyone rushes into the room at the sound of the gunshot and find Kim mortally wounded. Chris holds Kim in his arms and asks what she has done and why she did this, as she explains that the gods have guided him to his son. Chris begs her not to die, as she asks him to hold her one last time. After sharing one final kiss, Kim says her final words to Chris, echoing what he said to her from the song “Sun and Moon” (“How in one night have we come so far?”) and she dies in his arms (“Finale”).