The musical “Phantom Of The Opera” is based on the novel by French writer Gaston Leroux, first published in 1911, which tells of events that occurred at the Paris Opera House in the 1880s. The music was composed by Andrew Lloyd Webber and lyrics by Charles Hart and Richard Stilgoe and it opened at Her Majesty’s Theatre on 9 October 1986 with Michael Crawford and Sarah Brightman in the leading roles.

In 1911 Paris, the Paris Opéra hosts an auction of old theatrical props. Among the attendees is the Vicomte Raoul de Chagny, who purchases a papier-mâché music box and eyes it sadly, remarking how the details are “exactly as she said.” The auctioneer presents “a chandelier in pieces” as the next item up for bid, alluding to a connection with “the Phantom of the Opera”. As the porters remove the drop cloth covering the fixture, it flickers to life and ascends to the ceiling as the auditorium’s former grandeur is restored (“Overture”).

It is now 1881 and the cast of a new production, Hannibal, are rehearsing onstage when they learn that new owners, Firmin and André, are taking over the Paris Opéra House (“Hannibal Rehearsal”). Carlotta, the Opéra’s resident soprano prima donna, begins to perform an aria for the new managers when a backdrop inexplicably falls from the flies, barely missing her and prompting anxious chorus girls to whisper, “He’s here! The Phantom of the Opera!”. The managers try to downplay the incident, but Carlotta angrily insists that such things have been happening for “three years” and she storms out, quitting the show. Madame Giry, the Opéra’s ballet mistress, informs Firmin and André that Christine Daaé, a chorus girl and orphaned daughter of a prominent violinist, has been “well taught” and can sing Carlotta’s role. With cancellation of the sold out show being their only other alternative, the managers reluctantly audition Christine and are surprised to discover that she is indeed up to the challenge. As Christine sings the aria during the evening performance, the Opéra’s new patron, Raoul, the Vicomte de Chagny, recognizes her as his childhood friend and playmate (“Think of Me”).

Backstage after her triumphant début, Christine confesses to her best friend Meg (Madame Giry’s daughter) that she knows her mysterious teacher only as an invisible “Angel of Music” (“Angel of Music”). Raoul pays a visit to Christine’s dressing room. The two reminisce about the “Angel of Music” stories that her late father used to tell them and Christine confides that the Angel has visited her and taught her to sing (“Little Lotte”). Raoul indulges what he assumes are fantasies and insists on taking Christine to dinner. When Raoul leaves to fetch his hat, Christine hears the jealous Phantom’s voice and she entreats him to reveal himself. The Phantom obliges by appearing as a ghostly, partially masked face in her mirror (“The Mirror/Angel of Music (Reprise)”). Believing him to be the Angel of Music sent by her deceased father, Christine is irresistibly drawn through the mirror to the Phantom, who leads her down into the cellars of the Opéra house. The two then board a small boat and cross a subterranean lake to his secret lair (“The Phantom of the Opera”). The Phantom explains that he has chosen Christine to sing his music and serenades her. When he reveals a mirror that reflects an image of her in a wedding dress, the figure in the mirror gestures to Christine and she faints. The Phantom then covers her tenderly with his cloak (“The Music of the Night”).

As the Phantom is composing music at his organ, Christine awakens to the sound of the monkey music box (“I Remember”). Overcome with curiosity, she slips behind the Phantom, lifts his mask, and beholds his grotesquely disfigured face. The Phantom rails at her prying gesture, as Christine hides in fear. He then ruefully expresses his longing to look normal, and to be loved by her (“Stranger Than You Dreamt It”). Moved by pity, Christine returns the Phantom’s mask to him and the Phantom shepherds her back above ground.

Meanwhile, Joseph Buquet, the Opéra’s chief stagehand, regales the chorus girls with tales of the “Opéra Ghost” and his terrible Punjab lasso. Madame Giry arrives and warns Buquet to exercise restraint or face the Phantom’s wrath (“Magical Lasso”). In the managers’ office, André and Firman read notes from the Phantom aloud and are interrupted by Raoul, who accuses them of sending him a note saying that he should make no attempt to see Christine again. Carlotta and Piangi then burst into the office, demanding to know who sent Carlotta a note saying that her days at the Opéra are numbered. As André and Firmin try to calm the distressed Carlotta, Madame Giry delivers another note from the Phantom: he demands that Christine replace Carlotta in the new opera, Il Muto, lest they face a “disaster beyond imagination” (“Notes…”). Firmin and André dismiss the threat and assure an enraged Carlotta that she will remain their star (“Prima Donna”).

The première of Il Muto initially goes well, until the voice of the Phantom suddenly cuts through the performance, enraged that Box 5 was not kept empty for him. As Christine whispers that she knows the Phantom is near, Carlotta reminds her that her role is silent, calling her a “little toad”. The Phantom states that it is Carlotta who is the toad and reduces Carlotta’s voice to a frog-like croak. Firmin quickly tries to calm the situation by telling the audience that Christine will take over the starring role, moving forward the ballet to keep the audience entertained. Suddenly, the corpse of Joseph Buquet drops from the rafters, hanging from the Punjab lasso. Firmin and André plead for calm as mayhem erupts and the Phantom’s diabolical laughter is heard throughout the auditorium (“Poor Fool, He Makes Me Laugh”). 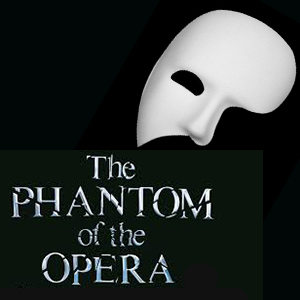 In the ensuing chaos, Christine escapes with Raoul to the roof and tells him about her subterranean encounter with the Phantom (“Why Have You Brought Me Here?/Raoul, I’ve Been There”). Raoul is skeptical but promises to love and protect her, and Christine reciprocates his vow (“All I Ask of You”). The heartbroken Phantom, having overheard their entire conversation, angrily vows revenge before returning to the auditorium and bringing down the chandelier during the curtain call (“All I Ask of You (Reprise)”).

Six months later, in the midst of a masquerade ball, the Phantom makes his first appearance since the chandelier disaster, in costume as the Red Death. He announces that he has written an opera entitled Don Juan Triumphant and demands that it be produced immediately, with Christine (who is now secretly engaged to Raoul) in the lead role, and he warns of dire consequences if his demands are not met. Noticing an engagement ring on a chain around Christine’s neck, the Phantom angrily pulls it from her and vanishes in a blinding flash of light (“Masquerade/Why So Silent”).

As the masquerade attendees scatter in fear, Raoul accosts Madame Giry and demands that she reveal what she knows about the Phantom. Giry reluctantly explains that the Phantom is actually a brilliant scholar, magician, architect, inventor, and composer who was born with a terrifyingly deformed face. Feared and reviled by society, he was cruelly exhibited in a cage as part of a traveling fair until he eventually escaped and disappeared. He has since taken refuge beneath the opera house, which has now become his home.

During rehearsals, Raoul – tired of the tyranny with which the Phantom rules the Opera – thinks to use the première of Don Juan Triumphant as a trap to capture the Phantom and put an end to his reign of terror once and for all. Carlotta falsely accuses Christine of being the mastermind and that it is her plan so she can be the star. Christine angrily defends herself, saying she is not the Phantom’s accomplice, but his victim. Raoul, knowing of the Phantom’s obsession with his fiancée, asserts that the Phantom will be sure to attend the opera’s première, and begs Christine to help him lure the Phantom into the trap, but she refuses (“Notes/Twisted Every Way”). During rehearsal, Piangi sings note after note off-key, causing frustration for everyone. The piano suddenly starts playing by itself-having been taken over by the Phantom-and soon the whole company sings the correct notes in unison.

Torn between her love for Raoul and her fear of the Phantom, Christine visits her father’s grave, longing for his guidance but understanding that she must move on (“Wishing You Were Somehow Here Again”). The Phantom appears atop the mausoleum, again under the guise of the Angel of Music (“Wandering Child”), and sings to Christine. Christine, tired and heartbroken, once again accepts her “Angel” as a friend, nearly succumbing to the Phantom’s influence, but Raoul arrives to both rescue her and confront The Phantom. The Phantom taunts Raoul, hurling fire balls at him until Christine begs Raoul to leave with her. Furious, the Phantom declares war upon them both and causes flames to spring up around the mausoleum (“Bravo Monsieur”).

With armed policemen having secured the auditorium and watching for the Phantom, Don Juan Triumphant premieres with Christine and Piangi singing the lead roles. During Don Juan’s and Aminta’s duet, Christine comes to the sudden realization that she is singing not with Piangi, but with the Phantom himself. Mimicking Raoul’s vow of devotion on the rooftop, the Phantom once again expresses love for Christine and forces his ring onto her finger. Christine rips off his mask, exposing his horrifically deformed face to the shocked audience (“The Point of No Return”). The opera house is plunged into chaos. Piangi’s garroted body is revealed backstage, the cast and audience fly into a state of panic, and the Phantom seizes Christine and flees the theatre. An angry mob, vowing vengeance for the murders of Buquet and Piangi, searches the theatre for the Phantom, while Madame Giry tells Raoul how to find the Phantom’s subterranean lair, and warns him to beware his magical lasso. (“Down Once More/Track Down This Murderer”).

The Phantom, having experienced kindness at last, understands that he cannot compel Christine to love him, and sets them both free. Raoul hurries Christine out of the lair, but she returns alone to give the Phantom back his ring. The Phantom tells Christine he loves her, before she tearfully exits with Raoul. The weeping Phantom huddles on his throne and covers himself with his cloak. The mob, led by Meg, enters the lair. Meg pulls the Phantom’s cloak from the throne, finding only his mask on the seat. She lifts the mask up into the light and gazes at it in wonder as the curtain falls (“Finale”).