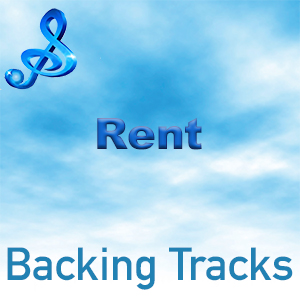 Rent is a rock musical with music, lyrics, and book by Jonathan Larson, loosely based on Giacomo Puccini’s opera La Bohème. It tells the story of a group of impoverished young artists struggling to survive and create a life in New York City’s East Village in the thriving days of Bohemian Alphabet City, under the shadow of HIV/AIDS.  On Broadway, Rent gained critical acclaim and won several awards. The Broadway production closed on September 7, 2008 after a 12-year run of 5,123 performances.  The success of the show led to several national tours and numerous foreign productions. In 2005, it was adapted into a motion picture featuring most of the original cast members.

On Christmas Eve in Manhattan’s East Village, two roommates—Mark, a filmmaker, and Roger, a rock musician—struggle to stay warm and produce their art (“Tune Up #1”). Mark’s mother leaves him a voicemail wishing him a merry Christmas and trying to comfort him since his ex-girlfriend Maureen dumped him (“Voice Mail #1”). Their friend Tom Collins, a gay anarchist professor at New York University, calls and plans to surprise them at their apartment, but is mugged before entering. At the same time, Mark and Roger’s former roommate and friend Benny, who has since become their harsh new landlord, has reneged on an earlier agreement and now demands last year’s rent, before shutting down their electrical power (“Tune Up #2”). However, Mark and Roger rebel and resolve not to pay the rent they cannot pay and which they were promised wouldn’t be a problem (“Rent”). Meanwhile, Angel, a cross-dressingstreet drummer (presently out of drag), finds Collins wounded in an alley and tends to him (“You Okay Honey?”) – the two are immediately attracted to each other, both learning that the other is HIV positive. It is revealed that Roger too has HIV which he contracted from his last girlfriend, who committed suicideafter learning of her diagnosis, which has caused Roger to fall into depression. Mark goes to see one of Maureen’s shows while Roger stays home (“Tune Up #3”), trying to compose on his guitar without success; he wishes desperately to write one last song to be remembered by before he dies (“One Song Glory”). An exotic dancer, junkie, and neighbor, Mimi, shows up at their apartment asking for help with lighting her candle, flirting with Roger in the process; however, he is clearly hesitant to return her affections (“Light My Candle”). Meanwhile, Joanne, a lawyer and Maureen’s girlfriend, receives a voicemail from her parents (“Voice Mail #2”).

At last, the missing Collins enters the apartment, presenting Angel, who is now in full drag and shares the money she made and the amusing story of how she killed a dog to earn it (“Today 4 U”). Benny arrives, speaking of Maureen’s upcoming protest against his plans to evict the homeless from a lot where he is hoping to build a cyber arts studio. Benny offers that, if they convince Maureen to cancel the protest, then Mark and Roger can officially remain rent-free tenants. However, the two rebuff Benny’s offer and he leaves (“You’ll See”). Mark leaves to fix Maureen’s sound equipment for the protest, unexpectedly meeting Joanne at the stage. Initially hesitant with each other, the two eventually bond over their shared distrust of Maureen’s promiscuous behaviors (“Tango: Maureen”). Mark joins Collins and Angel to film their HIV support group meeting (“Life Support”), while Mimi attempts to seduce Roger alone in his apartment (“Out Tonight”). Roger is extremely upset by Mimi’s intrusion, demanding she leave him alone and resisting any romantic feelings he may harbor for her (“Another Day”). After Mimi leaves, Roger reflects on his fear of dying an undignified death from AIDS, while the Life Support group echoes his thoughts (“Will I”).

Collins, Mark, and Angel protect a homeless woman from police harassment, but she chastises them (“On the Street”). To lighten the mood, Collins talks about his dream of escaping New York City to open a restaurant in Santa Fe (“Santa Fe”). Soon, Mark leaves to check up on Roger and while alone, Collins and Angel confess their love for each other (“I’ll Cover You”). Joanne hectically prepares for Maureen’s show, trying to balance all of the people calling her at once (“We’re Okay”). Before the performance, Roger apologizes to Mimi, inviting her to come to the protest and the dinner party his friends are having afterwards. At the same time, police, vendors, and homeless people prepare for the protest (“Christmas Bells”). Maureen begins her avant-garde, if not over the top, performance based on “Hey Diddle Diddle” (“Over the Moon”). At the post-show party at the Life Café, Benny arrives, criticizing the protest and the group’s bohemian lifestyle. In response, Mark and all the café’s bohemian patrons defiantly rise up to celebrate their way of living (“La Vie Boheme”). Mimi and Roger each discover that the other is HIV-positive and hesitantly decide to move forward with their relationship (“I Should Tell You”). Joanne explains that Mark and Roger’s building has been padlocked and a riot has broken out; Roger and Mimi, unaware, share their first kiss. The celebration continues (“La Vie Boheme B”).

The cast lines up to sing together before the plot of the second act begins, affirming that one should measure life “in love” (“Seasons of Love”). Afterwards, Mark and Roger gather to break back into their locked apartment with their friends (“Happy New Year”). A new voicemail reveals that Mark’s footage of the riot has earned him a job offering at a tabloid news company called Buzzline (“Voice Mail #3”). The others finally break through the door just as Benny arrives, saying he wants to call a truce and revealing that Mimi, a former girlfriend of his, convinced him to change his mind. Mimi denies rekindling her relationship with Benny, but Roger is upset, and although they apologize to each other, Mimi goes to her drug dealer for a fix (“Happy New Year B”).

Around Valentine’s Day, Mark tells the audience that Roger and Mimi have been living together, but they are tentative with each other. It is also told that Maureen and Joanne are preparing another protest, and during rehearsal, Maureen criticizes Joanne’s controlling behavior and Joanne criticizes Maureen’s promiscuous mannerisms. They break up dramatically following an ultimatum (“Take Me or Leave Me”). Time progresses to spring (“Seasons of Love B”), but Roger and Mimi’s relationship is strained by Mimi’s escalating heroin usage and Roger’s lasting jealousy and suspicion of Benny. Each alone, Roger and Mimi sing of love and loneliness, telling each other how they feel, as they watch Collins nurse Angel, whose health is declining due to AIDS (“Without You”). By the end of the summer, Mark continues to receive calls offering a corporate job at Buzzline (“Voice Mail #4”). A dance is performed representing all the couples’ sex lives (“Contact”). At the climax of the number, the two former couples break up, and Angel suddenly dies. At the funeral, the friends briefly come together to share their memories with Collins being the last to reminisce (“I’ll Cover You [Reprise]”). Mark expresses his fear of being the only one left surviving when the rest of his friends die of AIDS, and he finally accepts the corporate job offer (“Halloween”). Roger reveals that he is leaving for Santa Fe, which sparks an argument about commitment between him and Mimi, and between Maureen and Joanne. Collins arrives and admonishes the entire group for fighting on the day of Angel’s funeral, causing Maureen and Joanne to reconcile, but not Mimi and Roger. The group shares a sad moment, knowing that between deaths and leaving, their close-knit friendships will be breaking up. Everyone leaves except Mark and Roger, and so Mark tries to convince Roger to stay in New York. Roger, unable to handle Mimi’s declining health, becomes angry with Mark and leaves. Mimi returns to say goodbye, overhears everything Roger says, and, terrified, agrees to go to rehab (“Goodbye Love”). Collins is forcibly removed from the church for being unable to pay for Angel’s funeral; Benny shows compassion by paying and offering Mark and Collins drinks; Collins accepts, causing him and Collins to rekindle their old friendship, but Mark has to turn down the offer due to work commitments.

Some time later, both Mark and Roger simultaneously reach an artistic epiphany, as Roger finds his song in Mimi and Mark finds his film in Angel’s memory; Roger decides to return to New York in time for Christmas, while Mark quits his job to devote his efforts to working on his own film (“What You Own”). The characters’ parents, concerned and confused about their respective situations, leave several worried messages on their phones (“Voice Mail #5”). On Christmas Eve, exactly one year having passed, Mark prepares to screen his now-completed film to his friends. Roger has written his song, but no one can find Mimi for him to play it to. Benny’s wife, discovering Benny’s relationship with Mimi, has pulled Benny out of the East Village. The power suddenly blows and Collins enters with handfuls of cash, revealing that he reprogrammed an ATM at a grocery store to provide money to anybody with the code ‘ANGEL’. Maureen and Joanne abruptly enter carrying Mimi, who had been homeless and is now weak and close to death. She begins to fade, telling Roger that she loves him (“Finale”). Roger tells her to hold on as he plays her the song he wrote for her, revealing the depth of his feelings for her (“Your Eyes”). Mimi appears to die, but abruptly awakens, claiming to have been heading into a white light before a vision of Angel appeared, telling her to go back and stay with Roger. The remaining friends gather together in a final moment of shared happiness and resolve to enjoy whatever time they have left with each other, affirming that there is “no day but today” (“Finale B”).