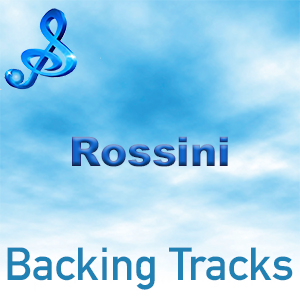 Gioachino Antonio Rossini – an Italian composer  (1792 – 1868) was born in Pesaro, Italy.  He wrote 39 operas as well as some sacred music, songs, chamber music, and piano pieces. He was the only child of Giuseppe, the town trumpeter, and Anna, a talented singer.

Gioachino was four years old when he moved to Bologna with his mother and while there, received his first music lesson. By the age of ten, he was able to perform musical accompaniment and church music and by the age of fifteen he was ready to enter Bologna’s Liceo Communale conservatory of music. At the age of eighteen, he was commissioned to write a one-act opera buffa (an Italian term for ‘comic opera’). This was premiered in Venice and its success lead to him writing six more over the next twelve months, followed by the two-act opera, La pietra del paragone: his first La Scala production in late autumn 1812. His next two operas, Tancredi and L’Italiana in Algeri, both produced in Venice in 1813, received overwhelming acclaim.

Rossini’s gift of wonderful melodies, coupled with his exuberant sense of humour and dramatic sense, had a powerful impact on his audience. His popularity was such that  he was invited to compose for Milan, but his next triumph was in Naples in 1815 for the opera soeria (‘serious opera’) Elisabetta, Regina d’Inghilterra. Rossini borrowed several parts from Elisabetta to write his most famous work Il Barbiere di Siviglia (The Barber of Seville).

While Rossini continued to write opera buffas for several Italian cities, between 1815 and 1822 he was continually writing opera seria for Naples which made him an idol of the Neapolitans.  During this time, he met the prima donna Isabella Colbran and married her in Bologna in 1822.  He wrote music to suit her dramatic style of singing and this is a distinguishing trait of his opera seria. This is especially prominent in the opera Othello (1817) where, in the third act, Rossini handles Desdemona’s doom with great authority.

Outside Naples, Rossini wrote more opera buffa. In 1817 he wrote La Cenerentola  which was based on Cinderella and wrote La Gazza ladra (The Thieving Magpie), which contains one of Rossini’s famous overtures.

Meanwhile in Naples, Rossini was taking his works to a new level: he was moving away from his first mature style to a more romantic approach to his characters and their settings. He wrote works such as La Donna del lago (1819), Zelmira and  Semiramide (Venice, 1823).

In the 1820s, Rossini gain an international reputation. He performed his operas in Vienna, London and Paris.  In Paris, he wrote for the Paris Opera: one of his works being Guillaume Tell (William Tell) (1829).

Rossini’s mother died in 1827, leaving his father alone and Rossini felt that his place was in Bologna. He decided to settle his affairs in Paris and then move to Italy.

Rossini did not write any more operas; instead, he spent the rest of his life entertaining his friends and cooking. He even wrote a cookery book.  In 1845 Isabella died, and Rossini, now 53, married his Parisian mistress, the celebrated beauty Olympe Pelissier.

In Middle age, Rossini suffered from considerable mental anguish. A move back to Paris in 1855 helped with his rehabilitation, and in the 1860s he even began composing small piano pieces. In 1864 he wrote Petite Messe Solennellle and in 1867 wrote a cantata for the Exposition Universelle, but by now his physical health was failing. In November 1868, after a short but painful illness, he died aged 76. His funeral was held at the Église de la Sainte-Trinité and was virtually a state occasion.