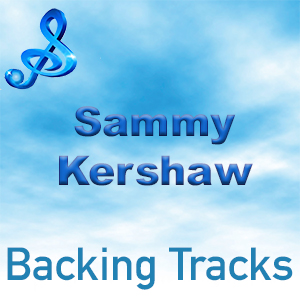 Sammy Kershaw (born February 24, 1958) is an American country music artist. He has released 16 studio albums, with three RIAA platinum certifications and two gold certifications among them. More than 25 singles have entered Top 40 on the Billboard Hot Country Songs charts, including the number one hit “She Don’t Know She’s Beautiful” and 10 more Top 10 hits including “Third Rate Romance”, “Meant to Be”, “Vidalia”, and “Love of My Life”.

Sammy Kershaw was born in the Acadiana town of Kaplan, located in south Louisiana. He is the third cousin of singer Doug Kershaw. When he was 11, his grandfather gave him his first guitar. But his father died that year, so Sammy started to work a variety of day jobs while playing roadhouses at night to support his family. He began performing in Acadiana with Louisiana legend J.B. Pere. At the age of 12, Kershaw was playing in a variety of honky-tonks and beer joints, and when he was 14 he met George Jones, his lifelong idol. Subsequently, he opened shows for Ray Price, Merle Haggard, and George Jones while still barely into his teens. When the pressures of growing up fast took their toll in the form of a serious drug and alcohol problem, he quit his bad habits in 1988. He took a break from the music world to work as a remodeling supervisor at Wal-Mart.

One of Kershaw’s demonstration tapes made its way to Mercury Records, which released his debut album Don’t Go Near the Water in 1991. This album was certified platinum by the RIAA, and it produced four hit singles. The lead-off, “Cadillac Style”, went to No. 3 in late 1991 and early 1992, followed by the title track at No. 12, “Yard Sale” at No. 17, and “Anywhere but Here” at No. 10. Kershaw was initially reluctant to release “Cadillac Style” because he felt that it was not suitable for his style; however, his co-producer, Buddy Cannon, convinced him to give the song a chance.Kershaw’s often honky-tonk material and singing voice led to critical comparisons to George Jones, and he covered one of Jones’s early singles, “What Am I Worth”, on his debut as well.

Kershaw’s second album, Haunted Heart, followed in 1993. Its lead-off single, “She Don’t Know She’s Beautiful”, became his only Number One hit, in April of that year. Following it were the title track, the Dennis Linde–penned “Queen of My Double-Wide Trailer”, and “I Can’t Reach Her Anymore”, all of which hit the Top 10 as well. Although Kershaw had been told by others that radio audiences might not identify with the subject matter on “Queen of My Double-Wide Trailer”, Kershaw wanted to release the song because he had an experience similar to its story line.[3] Like his debut, Haunted Heart was a platinum album. In mid-1994, Kershaw also covered the Lynyrd Skynyrd song “I Know a Little” on the tribute album Skynyrd Frynds, which included country music covers of Skynyrd songs. Also in 1994, Kershaw contributed the song “Fire and Rain” to the AIDS benefit album Red Hot + Country, produced by the Red Hot Organization.

Feelin’ Good Train was Kershaw’s third album, released later in 1994. This album also produced four hits, including two consecutive No. 2’s in “National Working Woman’s Holiday” and “Third Rate Romance” (the latter a cover of the Amazing Rhythm Aces hit from 1975), with the No. 27 “Southbound” and No. 18 “If You’re Gonna Walk, I’m Gonna Crawl” following in 1995. The album included a duet with George Jones on “Never Bit a Bullet Like This”, which had previously been released on Jones’s 1993 album High-Tech Redneck. Feelin’ Good Train was certified gold. It was followed by a Christmas album, Christmas Time’s A-Comin’, and Kershaw’s first greatest-hits package, Greatest Hits, Volume 1, both in 1995. The latter produced a No. 47 single in “Your Tattoo” (written by Kostasand Jack Tempchin), the first single of Kershaw’s career not to reach the Top 40.

Kershaw’s fourth studio album, the gold-certified Politics, Religion and Her, was issued in 1996. It produced Top 10 hits in “Meant to Be” and “Vidalia”, the latter of which Kershaw also considered a risky song, saying, “If radio will play this one more than twice—so people can get the story and learn what a Vidalia onion is—it’ll be a smash.” These songs were followed by “Fit to Be Tied Down” and the title track, both of which hit the Top 30. Also included on Politics, Religion and Her were covers of Chuck Berry’s “Memphis, Tennessee” and Sammy Johns’ “Chevy Van”. The same year, Kershaw briefly took ownership of a NASCAR Busch series team (now Xfinity Series).

Labor of Love was issued later in 1997 as his fifth album. Unlike his previous albums, this one was predominantly composed of ballads.[1] It produced a No. 2 in “Love of My Life”, and although none of the other three singles (“Matches”, “Honky Tonk America” and “One Day Left to Live”) reached higher than No. 22, the album was nonetheless certified platinum. His next album, Maybe Not Tonight, brought a Top 20 duet with Lorrie Morgan.

Kershaw stated that he enjoyed working with Morgan on the song, telling Country Weekly magazine, “I knew our vocals would match up… Plus, we have fun together. We’re friends and we have been friends for a long time.””Maybe Not Tonight” was commercially less successful than its predecessors, however, and it became the first album of Kershaw’s career not to achieve an RIAA certification. Following “Maybe Not Tonight” were the singles “When You Love Someone” and “Me and Maxine”, both of which peaked in the thirties. “Louisiana Hot Sauce”, the final release from Maybe Not Tonight, was also the first single of his career not to enter the charts.

In 2000, Kershaw released an album of cover songs, Covers the Hits. This album comprised 10 cover songs that Kershaw had recorded in his career. Some of the songs on it, such as the single “Third Rate Romance”, were previously found on Kershaw’s studio albums, while others came from various tribute albums (such as Skynyrd Frynds) to which he had contributed. Covers the Hits also included a rendition of Dr. Hook’s “Little Bit More”, a previously unreleased cover which Kershaw had recorded during the sessions for Labor of Love.

By 2001, Kershaw and Morgan had married. The two recorded a vocal duet album in 2001 entitled I Finally Found Someone (the title track being a cover of the Bryan Adams/Barbra Streisand duet). This album was less successful commercially, with its only Top 40 hit being the No. 39 “He Drinks Tequila”. Shortly afterward, a second ‘greatest hits’ package was released, and Kershaw left Mercury’s roster.

In 2003, Kershaw signed to Audium Entertainment to release the album I Want My Money Back. This album produced a No. 33-peaking in its title track, but the second single “I’ve Never Been Anywhere” fell short of the Top 40. The third and final single, “Beer, Bait & Ammo” (which failed to chart), was previously recorded and written by Kevin Fowler on his 2000 debut album of the same name, and would later be recorded by Mark Chesnutt on his 2004 album Savin’ the Honky Tonk.

After Audium closed its Nashville division, Kershaw signed to Category 5 Records, then a newly established independent label, in 2006. His first release for the label and first chart single in three years, “Tennessee Girl”, fell three spaces short of the Top 40 that year. It was the first release from his 2006 album Honky Tonk Boots. The album’s only other single, a cover of Mel McDaniel’s Number One hit “Baby’s Got Her Blue Jeans On”, failed to chart, and financial difficulties caused the label to close in 2007. In October of the same year, Kershaw divorced Morgan, citing irreconcilable differences.

Kershaw’s first single in two years, “Real People”, was released in late 2008 in the Boomerville/Big Hit label. However, the single failed to chart. His tenth studio album, Better Than I Used to Be, was released on August 31, 2010.

Kershaw had become increasingly interested in politics. On June 13, 2007, he announced his candidacy for lieutenant governor of Louisiana in the October 20 jungle primary. The position was held by the incumbent Democrat, Mitch Landrieu. Kershaw also faced a second Republican candidate, State Representative Gary Beard of Baton Rouge, an engineer first elected to the State House in a 2001 special election. Kershaw finished second with 30 percent of the vote, but Landrieu won re-election with a majority on the first ballot.

Watching his state embroiled in the Gulf Oil Spill in April 2010, Kershaw, a Lafayette resident, became the official spokesperson for Protect Our Coastline, a non-profit dedicated to providing relief to the fishermen and shrimpers affected most by the spill.

On August 28, 2010, Kershaw announced his second bid for lieutenant governor in the October 2 special election to replace Mitch Landrieu, who left office in May after being elected mayor of New Orleans. Kershaw’s intraparty rivals included state Republican chair Roger F. Villere Jr. of Metairie, St. Tammany Parish president Kevin Davis of Slidell, and Secretary of State Jay Dardenne of Baton Rouge. Kershaw polled 19 percent and carried 31 of the 64 parishes (more than any other candidate). But he finished third in overall votes behind Dardenne and Democrat Caroline Fayard. Kershaw endorsed fellow Republican Dardenne in the runoff election, joining him at campaign events, and giving Dardenne a “bear hug” at his victory celebration.

Kershaw continues touring throughout the year with his band, as well as performances with his often sold-out acoustic “Roots and Boots” tour, featuring himself onstage with other artists including Aaron Tippin, Joe Diffie, Pam Tillis, Darryl Worley, Colin Raye, and others.

On June 27, 2016, Kershaw performed in The Villages, Florida with a six piece band, including a steel guitar and fiddle. During the performance, Kershaw frequently made mention of not wanting to “look back” and instead continue to make music.