Seven Brides for Seven Brothers is a 1954 musical film, based on the short story “The Sobbin’ Women”, by Stephen Vincent Benét, which was based in turn on the Ancient Roman legend of The Rape of the Sabine Women.  The film is set in Oregon in 1850, is particularly known for its unusual choreography, which makes dance numbers out of such mundane frontier pursuits as chopping wood and raising a barn. The film won the Academy Award for Best Scoring of a Musical Picture and was nominated for four additional awards, including Best Picture.

In 1850, backwoodsman Adam Pontipee comes to town in the Oregon Territory to shop and look for a bride. He eventually comes upon the local tavern, where he sees

Milly chopping wood. After being convinced of her worth by the quality of her cooking and her insistence on finishing her chores before she would leave with him, he proposes and she accepts despite knowing him for only a few hours.

On the journey home, Milly talks about how she is excited to be cooking and taking care of only one man, visibly upsetting Adam. When they arrive at his cabin in the mountains, Milly is surprised to learn that Adam is the oldest of seven brothers living under the same roof. The brothers have been given Bible names “alphabetically”: Adam, Benjamin, Caleb, Daniel, Ephraim, Frank (short for frankincense– supposedly due to no Bible names beginning with F — and their mother thinking he smelled sweet), and Gideon. All of the brothers have red hair, and all but Gideon are well over six feet tall. Milly is also shocked at how filthy dirty their house is, along with how bad-tempered and ill-mannered Adam and his brothers are. At first, Milly believes that Adam wanted a servant girl instead of a wife, but Adam tells 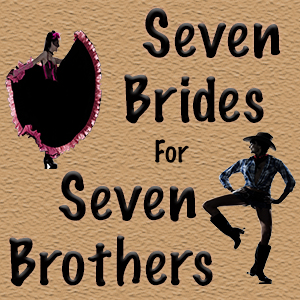 her that living in the backwoods is a hard life, and men and women have to work alongside each other to survive.

The next morning, Milly decides to teach Adam and his brothers cleanliness and proper manners – especially at the table during meals. After the brothers wash and shave, Milly is shock

ed at how handsome they are, and that none of them got married. It turns out that the brothers rarely saw a girl or woman and never learned how to communicate with them. At first, the brothers have a hard time changing from their “mountain man” ways, but eventually come to see their only chance to get brides of their own is to do things Milly’s way. They try out their new manners at a social gathering in the town (a dance and barn-raising), where they meet six women they like – Dorcas, Ruth, Martha, Liza, Sarah, and Alice. The girls take a fancy to the brothers as well. However, all of them already have suitors among the young men of the town, who taunt the brothers into fighting during the barn-raising. At first, the six brothers remember Milly’s teachings and try to resist being drawn into a fight. The suitors finally go too far when they attack Adam, provoking Gideon into fighting back. A brawl ensues in which the brothers dominate their physically weaker town rivals. Although the Pontipee brothers did not start the fight, they are kicked out of the town by the townspeople.

Winter comes, and the six younger brothers are pining for the girls they had fallen in love with. Milly asks Adam to talk to the brothers as she fears they will want to leave because of missing the girls. Adam reads his brothers the story of “The Sobbin’ Women” (taken from Plutarch’s story of the Sabine Women), one of the books Milly brought to the homestead. He tells them that they should take whatever action is necessary to get their women.

Aided by Adam, the brothers kidnap the six girls, then cause an avalanche in Echo Pass so the townspeople can’t pursue them. The Pontipee homestead is cut off from the town until the spring thaw opens Echo Pass again. The only problem: The brothers forgot to bring the parson along to perform the marriages. Milly is furious with Adam and his brothers for kidnapping the women, and she kicks both Adam and his brothers out of their house and sends them to the barn to “eat and sleep with the rest of the livestock,” while the women stay in the house with her. Adam, angered by Milly’s action, leaves for the trapping cabin farther up the mountain to spend the winter by himself. Gideon tells Milly and begs her to tell Adam not to leave, but Milly refuses, saying: “He’s gotta learn that he can’t treat people this way.”

Winter slowly passes, and the women vent their frustrations by pulling pranks on the brothers. After Milly announces that she’s going to have a baby, the women and the brothers come together as a family. Milly gives birth to a daughter, Hannah in the spring. Gideon rides to the cabin to inform Adam of his daughter’s arrival and asks him to come home. Adam refuses, saying that he had said he would return home when the pass was open.

Adam does return home, when Echo Pass comes open, to reconcile with Milly and meet his new daughter. As a newly responsible father, he has become aware of how worried the townspeople would be about what has happened to the six abducted girls. Adam admits that he would have hung his daughter’s kidnapper(s) on the nearest tree; Milly forgives him for his past behaviour.

The townspeople arrive, intent on hanging the Pontipee brothers for the kidnappings. The fathers, who find the brothers trying to force the women to return to town, misunderstand their efforts, and charge to the girls’ rescue.

Alice’s father, Reverend Elcott (Ian Wolfe) — the minister the brothers had forgotten to grab when they took the girls — hears baby Hannah cry in the distance, and worries that the baby might belong to one of the kidnapped girls. Elcott asks the girls whose baby he heard, and to not be afraid to tell. They each answer “Mine.” This misinformation serves the women’s and the brothers’ needs: the townspeople, including the girls’ fathers, insist on immediate shotgun weddings, which are performed by Reverend Elcott, while Adam and Milly watch and the fathers stand behind their respective daughters’ grooms, guns over their arms. The film ends with the brothers kissing their respective brides in the living room of the Pontipee cabin.