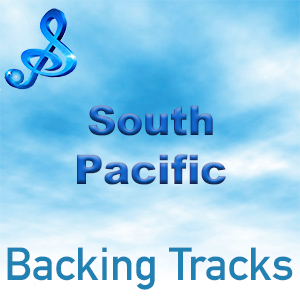 South Pacific is a musical composed by Richard Rodgers, with lyrics by Oscar Hammerstein II and book by Hammerstein and Joshua Logan. The work premiered in 1949 on Broadway and was an immediate hit, running for 1,925 performances. The plot is based on James A. Michener’s Pulitzer Prize-winning 1947 book Tales of the South Pacific and combines elements of several of those stories. Rodgers and Hammerstein believed they could write a musical based on Michener’s work that would be financially successful and, at the same time, send a strong progressive message on racism.

The original Broadway production enjoyed immense critical and box-office success, became the second-longest running Broadway musical to that point (behind Rodgers and Hammerstein’s earlier Oklahoma! (1943)), and has remained popular ever since. After they signed Ezio Pinza and Mary Martin as the leads, Rodgers and Hammerstein wrote several of the songs with the particular talents of their stars in mind. The piece won the Pulitzer Prize for Drama in 1950. Especially in the Southern U.S., its racial theme provoked controversy, for which its authors were unapologetic. Several of its songs, including “Bali Ha’i”, “I’m Gonna Wash That Man Right Outa My Hair”, “Some Enchanted Evening”, “There Is Nothing Like a Dame”, “Happy Talk”, “Younger Than Springtime”, and “I’m in Love with a Wonderful Guy”, have become popular standards.

The production won ten Tony Awards, including Best Musical, Best Score, and Best Libretto, and it is the only musical production to win Tony Awards in all four acting categories. Its original cast album was the bestselling record of the 1940s, and other recordings of the show have also been popular. The show has enjoyed many successful revivals and tours, spawning a 1958 film and television adaptations. The 2008 Broadway revival, a critical success, ran for 996 performances and won seven Tonys, including Best Musical Revival.

[wp_eStore_fancy9 id=2722] You’ve Got To Be Carefully Taught

On a South Pacific island during World War II, two half-Polynesian children, Ngana and Jerome, happily sing as they play together (“Dites-Moi”). Ensign Nellie Forbush, a naïve U.S. Navy nurse from Little Rock, Arkansas, has fallen in love with Emile de Becque, a middle-aged French plantation owner, though she has known him only briefly. Even though everyone else is worried about the outcome of the war, Nellie tells Emile that she is sure everything will turn out all right (“A Cockeyed Optimist”). Emile also loves Nellie, and each wonders if the other reciprocates those feelings (“Twin Soliloquies”). Emile expresses his love for Nellie, recalling how they met at the officers’ club dance and instantly were attracted to each other (“Some Enchanted Evening”). Nellie, promising to think about their relationship, returns to the hospital. Emile calls Ngana and Jerome to him, revealing to the audience that they are his children, unbeknownst to Nellie.

Meanwhile, the restless American Seabees, led by crafty Luther Billis, lament the absence of available women – Navy nurses are commissioned officers and off-limits to enlisted men. There is one civilian woman on the island, nicknamed “Bloody Mary”, a sassy middle-aged Tonkinese vendor of grass skirts, who engages the sailors in sarcastic, flirtatious banter as she tries to sell them her wares (“Bloody Mary”). Billis yearns to visit the nearby island of Bali Ha’i – which is off-limits to all but officers – supposedly to witness a Boar’s Tooth Ceremony (at which he can get an unusual native artifact); the other sailors josh him, saying that his real motivation is to see the young French women there. Billis and the sailors further lament their lack of feminine companionship (“There Is Nothing Like a Dame”).

U.S. Marine Lieutenant Cable arrives on the island from Guadalcanal, having been sent to take part in a dangerous spy mission whose success could turn the tide of the war against Japan. Bloody Mary tries to persuade Cable to visit “Bali Ha’i”, mysteriously telling him that it is his special island. Billis, seeing an opportunity, urges Cable to go. Cable meets with his commanding officers, Captain George Brackett and Commander William Harbison, who plan to ask Emile to help with the mission because he used to live on the island where the mission will take place. They ask Nellie to help them find out more about Emile’s background, for example, his politics and why he left France. They have heard, for instance, that Emile committed a murder, and this might make him less than desirable for such a mission.

After thinking a bit more about Emile and deciding she has become attracted on the basis of little knowledge of him, Nellie tells the other nurses that she intends to end her relationship with him (“I’m Gonna Wash That Man Right Outa My Hair”). When he arrives unexpectedly and invites Nellie to a party where he will introduce her to his friends, however, she accepts. Emile declares his love for Nellie and asks her to marry him. When she mentions politics, he speaks of universal freedom, and describes fleeing France after standing up against a bully, who died accidentally as the two fought. After hearing this, Nellie agrees to marry Emile. After he exits, Nellie joyously gives voice to her feelings (“I’m in Love with a Wonderful Guy”).

Cable’s mission is to land on a Japanese-held island and report on Japanese ship movements. The Navy officers ask Emile to be Cable’s guide, but he refuses their request because of his hopes for a new life with Nellie. Commander Harbison, the executive officer, tells Cable to go on leave until the mission can take place, and Billis obtains a boat and takes Cable to Bali Ha’i. There, Billis participates in the native ceremony, while Bloody Mary introduces Cable to her beautiful daughter, Liat, with whom he must communicate haltingly in French. Believing that Liat’s only chance at a better life is to marry an American officer, Mary leaves Liat alone with Cable. The two are instantly attracted to each other and make love (“Younger Than Springtime”). Billis and the rest of the crew are ready to leave the island, yet must wait for Cable who, unbeknownst to them, is with Liat (“Bali Ha’i” (reprise)). Bloody Mary proudly tells Billis that Cable is going to be her son-in-law.

Meanwhile, after Emile’s party, Nellie and he reflect on how happy they are to be in love (Reprises of “I’m in Love with a Wonderful Guy”, “Twin Soliloquies”, “Cockeyed Optimist” and “I’m Gonna Wash That Man Right Outa My Hair”). Emile introduces Nellie to Jerome and Ngana. Though she finds them charming, she is shocked when Emile reveals that they are his children by his first wife, a dark-skinned Polynesian woman, now deceased. Nellie is unable to overcome her deep-seated racial prejudices and tearfully leaves Emile, after which he reflects sadly on what might have been (“Some Enchanted Evening” (reprise)).

It is Thanksgiving Day. The GIs and nurses dance in a holiday revue titled “Thanksgiving Follies”. In the past week, an epidemic of malaria has hit the island of Bali Ha’i. Having visited Bali Ha’i often to be with Liat, Cable is also ill, but escapes from the hospital to be with Liat. As Liat and Cable spend more time together, Bloody Mary is delighted. She encourages them to continue their carefree life on the island (“Happy Talk”) and urges them to marry. Cable, aware of his family’s prejudices, says he cannot marry a Tonkinese girl. Bloody Mary furiously drags her distraught daughter away, telling Cable that Liat must now marry a much older French plantation owner instead. Cable laments his loss. (“Younger Than Springtime” (reprise)).

For the final number of the Thanksgiving Follies, Nellie performs a comedy burlesque dressed as a sailor singing the praises of “his” sweetheart (“Honey Bun”). Billis plays Honey Bun, dressed in a blond wig, grass skirt and coconut-shell bra. After the show, Emile asks Nellie to reconsider. She insists that she cannot feel the same way about him since she knows about his children’s Polynesian mother. Frustrated and uncomprehending, Emile asks Cable why he and Nellie have such prejudices. Cable, filled with self-loathing, replies that “it’s not something you’re born with”, yet it is an ingrained part of their upbringing (“You’ve Got to Be Carefully Taught”). He also vows that if he gets out of the war alive, he won’t go home to the United States; everything he wants is on these islands. Emile imagines what might have been (“This Nearly Was Mine”). Dejected and feeling that he has nothing to lose, he agrees to join Cable on his dangerous mission.

The mission begins with plenty of air support. Offstage, Billis stows away on the plane, falls out when the plane is hit by anti-aircraft fire, and ends up in the ocean waiting to be rescued; the massive rescue operation inadvertently becomes a diversion that allows Emile and Cable to land on the other side of the island undetected. The two send back reports on Japanese ships’ movements in the “Slot”, a strategic strait; American aircraft intercept and destroy the Japanese ships. When the Japanese Zeros strafe the Americans’ position, Emile narrowly escapes, but Cable is killed.

Nellie learns of Cable’s death and that Emile is missing. She realizes that she was foolish to reject Emile because of the race of his children’s mother. Bloody Mary and Liat come to Nellie asking where Cable is; Mary explains that Liat refuses to marry anyone but him. Nellie comforts Liat. Cable and Emile’s espionage work has made it possible for a major offensive, Operation Alligator, to begin. The previously idle fighting men, including Billis, go off to battle.

Nellie spends time with Jerome and Ngana and soon comes to love them. While the children are teaching her to sing “Dites-Moi,” suddenly Emile’s voice joins them. Emile has returned to discover that Nellie has overcome her prejudices and has fallen in love with his children. Emile, Nellie and the children rejoice (“Dites-Moi” (reprise)).