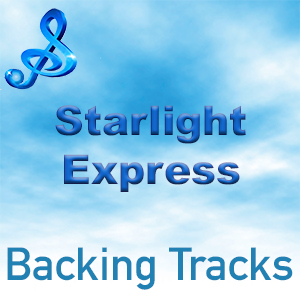 Starlight Express has been revised many times since it was first produced. Each professional production has differed from the last. These differences range from tweaks to lyrics, to the omission or inclusion of entire songs, characters and sub-plots. Throughout Starlight Express’s history, however, the fundamental story has stayed the same: a young but obsolete steam engine, Rusty, races in a championship against modern engines in the hope of impressing a first-class carriage, Pearl.

This synopsis reflects the show as it was first produced, in the West End in 1984.

Late at night, a child plays with his toy trains. Calling himself ‘Control’, he presides over a championship to decide which of his trains is ‘the fastest in the world’. He falls asleep and, in his dreams, the championship begins.

A steam engine called Rusty enters. Greaseball mocks Rusty, who replies that he will win the championship, despite steam being obsolete compared to diesel (Call Me Rusty). Control intervenes and orders Rusty to collect the coaches from the marshalling yard.

Rusty returns with the coaches: a dining car called Dinah, a smoking car called Ashley, a buffet car called Buffy, and a first-class car called Pearl. Control sends Rusty away to fetch the freight trucks as the coaches introduce themselves to the audience (A Lotta Locomotion).

Greaseball returns. He boasts again, this time to the coaches (Pumping Iron).

Rusty returns with the six cars that make up the freight train: three boxcars called Rocky 1, Rocky 2 and Rocky 3, a brick truck called Flat Top, an aggregate hopper called Dustin, and a brake truckcalled C.B. They introduce themselves to the audience and argue with the coaches over whether it’s preferable to carry people or cargo (Freight).

Entries are about to close when a surprise entry arrives: Electra, an electric train. Accompanied by his five components – an armaments truck called Krupp, a repair truck called Wrench, a money truck called Purse, a freezer truck called Volta and an animal truck called Joule – Electra declares that electricity is the future of speed (AC/DC).

Greaseball and Electra square up to each other as the entrants form a parade to celebrate the race (Coda of Freight).

Control announces the rules of the championship: the trains will compete in pairs, with an engine pulling a coach. There will be three eliminator heats. The winner of each heat will go into the final to decide the fastest train.

The engines start to pick their coaches. Rusty offers to race with Pearl, but she rejects him, explaining that she is waiting for her ‘dream train’ (He Whistled at Me). Electra’s messenger, Purse, enters with an invitation from Electra. Even though Electra is not her dream train either, she accepts, leaving Rusty alone.

After the race, Dinah objects to Greaseball’s cheating. In response he abandons her. C.B. comforts Dinah (There’s Me).

Meanwhile, Rusty has retreated to the freight yard where an old steam train called Poppa – a former champion – is singing a blues song to the freight cars (Poppa’s Blues). Poppa tries to persuade Rusty to race without Pearl, urging him to have faith in a mythical force he calls ‘the Starlight Express’. When Rusty refuses, Poppa introduces him to an old sleeping car called Belle (Belle The Sleeping Car).

Rusty agrees to race with Belle. They compete in the second eliminator heat against Electra and Pearl, and Weltschaft and Joule. Electra and Pearl finish first, securing a place in the final. Rusty and Belle finish in last place.

Already despondent after losing Pearl as his race partner, Rusty loses his last shreds of confidence. Poppa decides to step up and prove that steam power is still relevant, despite everyone’s misgivings, by racing himself in the third eliminator heat. Only Dustin, the aggregate hopper, is willing to race with him. Rusty points out that the race is already full, but suddenly Control announces that the British train has been scrapped, leaving space for a late entry. Poppa interprets this as a sign from the Starlight Express and enters the race.

The third eliminator heat pits Poppa and Dustin against Bobo and Ashley, and Turnov and Wrench. Poppa wins the race, securing a place in the final against Greaseball and Electra, but the effort exhausts him. Now worn out, he begs Rusty to take his place. Rusty refuses at first, but then he notices Pearl with Electra and is jealous. When C.B. offers to race with him, Rusty announces that he will take Poppa’s place. Greaseball and the other competitors mock him then leave. Alone, Rusty prays to the Starlight Express for help in the final (Starlight Express).

The trains debate whether Rusty should be allowed to take Poppa’s place in the final, since he’s already competed and lost, or whether the place should go instead to Bobo, who finished second in Poppa’s heat (The Rap). They ultimately decide to let Rusty race.

Control offers the engines the chance to change partners. Pearl abandons Electra and joins Greaseball, leaving Dinah feeling betrayed. Dinah expresses her shame at being uncoupled, although she can’t bring herself to say the word itself (U.N.C.O.U.P.L.E.D.).

Ashley, Buffy and Belle try to persuade Dinah to fight for Greaseball’s affections (Rolling Stock (Reprise)). But instead she accepts an offer from Electra to replace Pearl at the final.

Elsewhere, C.B. hatches a plan. He tells Greaseball he’ll help him win the championship by sabotaging Rusty. He then tells Electra he’ll wipe out Greaseball, clearing the way for Electra to win. When Electra expresses his surprise at C.B.’s duplicity, C.B. explains that he’s spent a career secretly causing train crashes for fun (C.B.).

Rusty complains that he was cheated, but the marshals refuse to listen. Pearl confronts Greaseball, but he warns her to say nothing, as the marshals would consider her complicit and punish her as well. Rusty retreats to the freight yard, where he bumps into the Rockies. They tell him that without luck, he will never win and that he should give up and ‘just sit quiet at the back of the train’. (Right Place, Right Time).

The Starlight Express disappears and Rusty finds himself back in the freight yard with Dustin, who says he just was just asleep, but felt the starlight’s presence. Rusty asks Dustin to race with him in the final. He accepts and they head off together.

Moments before the race, Dinah, angry with the way Electra treats her, disconnects from him. Electra quickly appeals to C.B. to take her place. The trains gather to watch what they expect will be a head-to-head final between Greaseball and Pearl, and Electra and C.B.. Suddenly Rusty arrives with Dustin. The marshals allow him to enter the race.

The race is fast and furious. Greaseball struggles with an unwilling Pearl, and Electra uses all his power to disrupt his opponents. Electra zaps electricity at Greaseball, but misses and injures Pearl. Greaseball, showing no concern, simply disconnects Pearl at full speed. Rusty diverts from the race course just in time to save her, but at the cost of falling into distant third place. To avoid being disqualified for not having a coach, Greaseball starts to grapple with Electra over C.B. The fight degenerates into chaos and Greaseball, Electra and C.B. crash, allowing Rusty to win the race. But instead of celebrating he leaves immediately to find Pearl. Control warns that, if Rusty doesn’t return quickly, his lap of honour will be cancelled.

Away from the other engines, Pearl fears that she caused Rusty to lose the race. She realises that of all the trains she’s raced with, only Rusty ever acted selflessly towards her (Only He). Rusty arrives. He tells Pearl that he won the race and confesses his love for her (Only You).

Greaseball finally apologises to Dinah for his behaviour and they reconcile. Greaseball complains that he’s ‘finished’ as a racer, but Poppa offers to rebuild him as a steam engine. Control tries to assert some control, announcing that Rusty’s lap of honour is cancelled. Poppa and the other engines tell Control to ‘shut it’ and celebrate the second coming of steam power (Light at the End of the Tunnel).

1 thought on “Starlight Express The Musical”