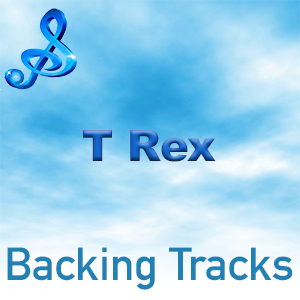 T Rex were an English rock band, formed in 1967 by singer-songwriter and guitarist Marc Bolan. In 1969 the band shifted their acoustic sound to an electric one and the 1970 release of the single “Ride a White Swan” marked the groups commercial success as part of the emerging glam rock scene.

From 1970 until 1973, T Rex scored a run of eleven singles in the UK top ten four of which were UK number one hits, “Hot Love”, “Get It On”, “Telegram Sam” and “Metal Guru”. The band’s 1971 album Electric Warrior reached number 1 in the UK. The 1972 follow-up, The Slider, entered the top 20 in the US. Following the release of “Twentieth Century Boy” in 1973, which reached number three in the UK, T Rex began to experience less commercial success but continued recording one album per year.

Mark Bolan died in a car crash in 1977 and this marked the end of the band, but their legacy lives on in the music they left behind.