We Will Rock You  is a rock musical based on the songs of British rock band Queen with a book by Ben Elton. The musical tells the story of a group of Bohemians who struggle to restore the free exchange of thought, fashion, and live music in a distant future where everyone dresses, thinks and acts the same. Musical instruments and composers are forbidden, and rock music is all but unknown.

We Will Rock You (often abbreviated as WWRY) is a rock musical based on the songs of British rock band Queen with a book by Ben Elton. The musical tells the story of a group of Bohemians who struggle to restore the free exchange of thought, fashion, and live music in a distant future where everyone dresses, thinks and acts the same. Musical instruments and composers are forbidden, and rock music is all but unknown.

Directed by Christopher Renshaw and choreographed by Arlene Phillips, the original West End production opened at the Dominion Theatre on 14 May 2002, with Tony Vincent, Hannah Jane Fox, Sharon D. Clarke and Kerry Ellis in principal roles. Although the musical was at first panned by critics, it has become an audience favourite, becoming the longest-running musical at the Dominion Theatre, celebrated its tenth anniversary on 14 May 2012.

The tenth longest-running musical in West End history, the London production closed on 31 May 2014 after a final performance in which Brian May and Roger Taylor both performed. A number of international productions have since followed the original, and We Will Rock You has been seen in six of the world’s continents. Many productions are still active globally.

The story is set exactly 300 years in the future in a vaguely Orwellian world. Earth has been renamed as the “iPlanet” (Planet Mall in older productions) and is controlled by the Globalsoft Corporation. (“Innuendo”) On the iPlanet, mainstream commercial conformity reigns, in which Ga Ga Kids watch the same movies, listen to computer-generated music, wear the same clothes and hold the same thoughts and opinions. Musical instruments are forbidden, and rock music is unknown. (“Radio Ga Ga”)

In the newest graduating class is black sheep, Galileo, who has dreams and hears strange words in his head, most of which are lyrics of songs long since lost, though he does not understand their significance. Despite his teacher’s advice, Galileo refuses to conform like the rest of his classmates. (“I Want to Break Free”) Galileo is captured by Khashoggi, commander of Globalsoft’s police. The teacher also reveals a second anomaly, a young, goth woman named Scaramouche who is openly mocked and derided by her peers (“Somebody to Love”). She too is arrested by Khashoggi.

Ruling Globalsoft Corporation is Killer Queen. (“Killer Queen”) She has heard of a prophecy that instruments have been hidden somewhere on the iPlanet in the “place of living rock”, and a “bright star” will show the way to them. She orders Khashoggi to get to the bottom of the matter and crush the rebel Bohemians who believe in the prophecy. Killer Queen then basks in her power over the iPlanet. (“Play the Game”)

Galileo and Scaramouche wake up in a hospital. They realise that they are kindred spirits, feared by the rest of their society. (“Under Pressure”) They flee together from the hospital. Killer Queen has blown up all the rocks on the iPlanet, but cannot find any supposed hidden instruments. She insists that they have won, and the prophecy will not come to pass. (“A Kind of Magic”) 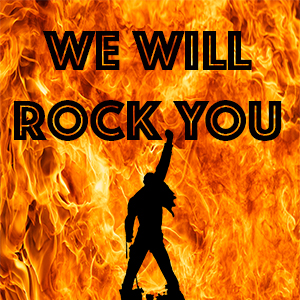 On the streets, Bohemians Britney and Oz climb out of the sewers, where they have been gathering materials to make musical instruments. Britney is a believer in the Dreamer who will fulfil the prophecy, and insists to the cynical Oz that it’s the key to bringing real music back into the world. (“I Want It All”) Brit and Oz hear footsteps approaching, and hide.

Galileo and Scaramouche arrive, with Galileo talking about his belief that he has a destiny. He says that he has a name for the woman: “Scaramouche”. Britney and Oz reveal themselves, and accuse Galileo and Scaramouche of being spies, because Galileo keeps spouting words of the “sacred text”. Galileo insists that he only hears those words in his head. Britney tests Galileo, singing the first few lines of “Bohemian Rhapsody”. Galileo responds correctly with the subsequent lines, and Britney realises that he is the Dreamer of the prophecy. They bring Galileo and Scaramouche to the Heartbreak Hotel, which is located at the ruins of the Tottenham Court Road tube station, where the Bohemians have made their home. (“Headlong”) Of note, the original London production is staged at the Dominion Theatre, which is located above the real Tottenham Court Road tube station.

The Bohemians explain that they take their names after singers long gone, and mourn the deaths of those who died young. (“No One But You”) The group then celebrate the reason rock bands started playing music in the first place, which was for love. (“Crazy Little Thing Called Love”)

Khashoggi and his police suddenly arrive at the Heartbreak Hotel, where they round up the Bohemians for capture. Britney breaks free and battles the police in order to enable Galileo and Scaramouche to escape, but in the process is killed.

The Ga Ga Kids of the iPlanet move on in their regular fashion. (“One Vision”)

Galileo and Scaramouche have escaped the Heartbreak Hotel, and realise that back at the hospital, tracking devices were installed in their heads. They remove them, and upon realising that they are all that’s left of the rebels, they confess their love for each other. (“Who Wants to Live Forever”)

The surviving Bohemians have been rounded up by Khashoggi to be tortured. (“Flash”) When he cannot get any information from them about the prophecy, he has them brain-drained. (“Seven Seas of Rhye” interpolating “Lazing on a Sunday Afternoon”)

Back at Globalsoft headquarters (“Fat Bottomed Girls”) Khashoggi reports that the Bohemians are no longer a problem. Killer Queen prematurely starts to celebrate. (“Don’t Stop Me Now”) Khashoggi interrupts her, explaining that Galileo and Scaramouche escaped. Killer Queen declares this is the last time Khashoggi has disappointed her, and has him brain-drained. (“Another One Bites the Dust”)

Galileo and Scaramouche are making their way to the Seven Seas of Rhye, arguing all the way. (“Hammer to Fall”) At the Seven Seas of Rhye pub in Montreaux, Pop the librarian is serving drinks to the lifeless Bohemians. (“These Are the Days of Our Lives”) When Galileo and Scaramouche arrive, Pop explains the full nature of the prophecy to them as inscribed by the three remaining members of the band Queen just before they were sentenced to death (Brian May, his last request being a final guitar solo, apparently delayed his execution for three and a half days). Scaramouche figures out that the bright shining star of the prophecy is rock star Freddie Mercury’s statue, and that it’s pointing to Wembley Stadium, the “place of living rock”. After initially preparing to travel by bicycle, (opening of “Bicycle Race”) Scaramouche protests that the method “isn’t very cool”, and so they travel there by motorcycle. (“Headlong (reprise)”)

Wembley Stadium is in ruins, with no instruments to be found. Reconciling and their love for each other rekindled (“Love of My Life”), Scaramouche inspires Galileo to perform the opening of “We Will Rock You”, and an electric guitar is revealed. Galileo cannot play it, but Scaramouche can. (“Brighton Rock solo”) Pop hacks into Globalsoft’s network so their music can be heard by everyone on the iPlanet, and Killer Queen is defeated. (“Tie Your Mother Down”, “We Will Rock You / We Are the Champions”)

After the curtain calls (“We Will Rock You (fast version)“), a question appears that says “Do you want ‘Bohemian Rhapsody’?” Everybody in the audience is supposed to shout yes, and the answer appears as “Oh…alright then” and the entire cast perform “Bohemian Rhapsody” as an encore.