The Woman in White is a musical by Andrew Lloyd Webber and David Zippel with a book by Charlotte Jones, based on the novel The Woman in White written by Wilkie Collins, and elements of The Signal-Man by Charles Dickens. It ran for nineteen months in the West End and three months on Broadway, making it one of Lloyd Webber’s shortest-running shows.

On a midnight train trip on the way to Limmeridge House as a drawing teacher, Walter Hartright sees a strange woman dressed entirely in white, apparently fleeing from someone and desperate to share a terrible secret with him. The signalman is scared because although he saw no-one, it was predicted a year earlier that in a ‘year to this day’, someone would be found dead on the railway track.

Walter meets his new students: Marian Halcombe and her pretty half-sister Laura Fairlie, who is heir to the estate which includes Limmeridge House. He tells them about his encounter, and they resolve to solve the mystery.

A love triangle develops as Walter and Laura quickly fall in love but Marian also falls for Walter and those feelings are not reciprocated. The peasants on the Limmeridge Estate sing and dance to celebrate the harvest. A girl is excluded from the festival because her mother believes her to be ‘telling tales’. She tells Hartright of a ghost of a woman in all white. Hartright goes to the graveyard where the child saw the ‘ghost’ and meets Anne Catherick, who tells him her name and the name of the man who she is scared of: “Sir Percival Glyde”. Marian tells Walter that Laura is engaged to a man of ‘titled property’: Sir Percival Glyde. Later Glyde arrives at Limmeridge, pretending to be a long-standing friend to Marian. He suggests that they move the wedding up from spring to Christmas and Laura eventually agrees. 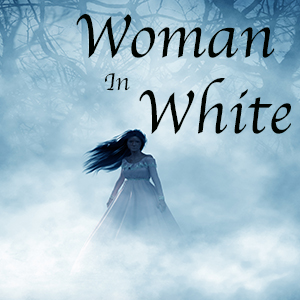 Count Fosco, Glyde’s friend and best man for the wedding, arrives and becomes attracted to Marian.

When questioned by Walter about Anne Catherick, Glyde tells him that she is mad. He mentions that he tried to help her, and she thinks that he is her enemy. Laura is reluctant to marry Glyde, but Marian encourages her to honor her father’s dying wish. Walter receives all this news angrily and leaves for London, but not before Laura returns a picture he drew of her. Laura and Glyde are married. Anne Catherick decides to travel to Laura’s side to help her, because she insists that Glyde ‘knows no mercy’.

Marian moves into Blackwater House, Glyde’s estate. Laura becomes angry and distrustful of Marian because her advice led her to marry a man whom she discovers to be a physically abusive husband; he only wants her for her money, to pay off his debt. Marian is determined to free Laura from this ill-fated marriage.

The next day, Glyde presents Laura with a document to sign, but he will not tell her its contents. Laura is immediately suspicious, and refuses to sign something she knows nothing about. Glyde is furious, but cannot force her to sign the document. The girls go for a walk to calm down, and meet Anne Catherick. They witness Anne being taken back to the Asylum. They are then completely convinced that Glyde and his friend Fosco are villains. Laura and Anne realize how similar they are to each other.

Marian eavesdrops on Sir Percival and Count Fosco, and overhears their evil plans to steal the Limmeridge Estate. She also overhears their plans for Anne Catherick, but Count Fosco figures out that he is being watched before he reveals anything important about the madwoman. He leaves the library to put Marian to bed. Marian, having gone to bed, starts to dream a montage of events that have occurred recently, mixed in with some noises. The noises, though not apparent to Marian, are actually Laura arguing and screaming.

Marian shortly is woken up by Count Fosco, who tells her that Laura was walking in her sleep and fell out the window. Marian is quite shaken by the tragic news. Fosco, avoiding drama, heads off to his house in London. However, being infatuated with Marian, he gives her his address in case she needs anything. At the village funeral Glyde suggests to Mr Fairlie that they get to the papers that need to be attended to. In a show of grief Glyde tries to shake Marian’s hand but she ignores him, but vowing revenge for her sister she heads to find Walter.

In London, Walter has run out of money and gives his last coin to a beggar. Having heard the news through the grapevine of Laura’s death, Walter expresses his grief at losing the love of his life. Coincidentally, Glyde, who is frustrated with paperwork, also shares Walter’s feelings for Laura. Marian goes to London in search of Walter.

When Marian finds Walter, he joins her in her quest to learn the secret of Anne Catherick and avenge Laura’s death. Marian believes that Anne’s location is in a document that she witnessed Count Fosco sign the night she eavesdropped. Meanwhile, Glyde is happily betting the money that he has not yet received, which infuriates Fosco and leads to a split in their friendship. Marian and Walter are ready to leave for their visit to Count Fosco’s. Marian is dressed specifically with the intent to use her feminine wiles against Fosco, which makes Walter suddenly realize his true feelings for her. Fosco, pleased with his part in the manipulation of everyone, gloats to himself and his pet mice.

Marian and Walter go to Fosco’s home to retrieve the document, where he attempts to seduce Marian, not realizing that she is purposefully playing along. She sends him to the bathroom to shave as a diversion, whilst she searches for the document. She finds it, and discovers the location of Anne’s asylum. When Fosco returns from the bathroom he discovers that Marian is visiting for another purpose. A rejected Fosco admits if Marian were really interested in him, he would have proposed marriage.

Meanwhile, Sir Percival Glyde has convinced Mr. Fairlie to give the Limmeridge Estate to him because he was married to Laura. Fairlie signs the document and Glyde goes off to catch a train.

Marian, Laura and Walter arrive at Limmeridge House after Glyde has left for the train. Mr. Fairlie reveals that Anne Catherick is in fact Laura’s half-sister, and they look identical. Marian tells him of the conspiracy, but Fairlie sadly tells her that he already signed the document. The three run to the train to stop Glyde from getting away.

While still in Anne’s white clothing, Laura pretends to be Anne and attempts to haunt Glyde if he does not tell the truth about the secret. “I had to drown your bastard child!” he exclaims. Laura reads between the lines and figures out the secret: Glyde had raped Anne, and drowned their child at Blackwater Lake. He tries to kill Laura to silence her but is run over by a train. The signalman’s prediction comes true, but it is Glyde, not Walter, who lies dead on the tracks. Walter and Laura are happily married, Walter inherits Limmeridge House, and Marian is left heartbroken.