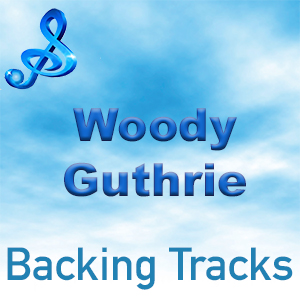 Woody Guthrie was the most important American folk music artist of the first half of the 20th century, in part because he turned out to be such a major influence on the popular music of the second half of the 20th century, a period when he himself was largely inactive. His greatest significance lies in his songwriting, beginning with the standard “This Land Is Your Land” and including such much-covered works as “Deportee,” “Do Re Mi,” “Grand Coulee Dam,” “Hard, Ain’t It Hard,” “Hard Travelin’,” “I Ain’t Got No Home,” “1913 Massacre,” “Oklahoma Hills,” “Pastures of Plenty,” “Philadelphia Lawyer,” “Pretty Boy Floyd,” “Ramblin’ Round,” “So Long It’s Been Good to Know Yuh,” “Talking Dust Bowl,” and “Vigilante Man.” These and other songs have been performed and recorded by a wide range of artists, including a who’s who of folksingers, among them

Woodrow Wilson Guthrie was born on July 14, 1912, in Okemah, Oklahoma. His father, Charles, taught Woody Western songs, Indian songs, and Scottish folk tunes. His mother, Nora Belle, also had a love of music and had an equally profound effect on Woody.

Woody was a keen observer of the world around him: the people, the music and the landscape he was exposed to made lasting impressions on him.

During his early years in Oklahoma, he experienced several personal tragedies. His older sister, Clara, died, the family suffered financial ruin, his father was severely burned, and his mother was institutionalized and then died at the age of 44.

Woody lived through a severe economic turnaround in his home town of Okemah. In 1920, oil was discovered nearby and overnight the town became an ‘oil boom’; transforming a sleepy farm town into a haven for thousands of workers. Within a few years, the oil flow had stopped, leaving the town and its inhabitants devastated and broke.

From his experiences, Woody formed a wry outlook on life.  He also developed an interest in rambling around the country and so took to the open road.

In 1931, Woody left Okemah for Pampa, Texas.  He met, fell in love with and married Mary Jennings, younger sister of Matt Jennings.  Woody, Matt Jennings and Cluster Baker formed The Corn Cob Trio and later the Pampa Junior Chamber of Commerce Band. It was also in Pampa that Woody discovered a love for drawing and painting: an interest he would pursue for the rest of his life.

The Great Depression forced him to hit Route 66 in pursuit of finding work to support his family.  Moneyless and hungry, he hitchhiked, rode freight trains and walked his way to California, taking whatever work he could find.  He painted signs, played guitar and sang in saloons.

Woody arrived in California in 1937, and in Los Angeles, got a job on KFVD radio. He sang ‘old time’ traditional songs and some original songs, and together with his singing partner Maxine Crissman, Woody began to attract widespread public attention.

The local radio provided Woody with a forum where he developed his talent for controversial social commentary and criticism.  He criticised people such as corrupt politicians, lawyers and businessmen and praised the compassion and humanist principles of people who were fighting for the rights of others.  Woody became an advocate for truth, fairness and justice and his song writing reflected this: “I Ain’t Got No Home”, “Goin’ Down The Road Feelin’ Bad”, “Talking Dust Bowl Blues”, and “Hard Travelin’”.

Woody moved to New York in 1940 and was quickly embraced for his political views and musical “authenticity” by leftist organizations, artists, writers, musicians, and progressive intellectuals.  He made friends and formed musical collaborations with Lead Belly, Cisco Houston, Burl Ives, Pete Seeger, Will Geer, Sonny Terry, Brownie McGhee, Josh White, Millard Lampell, Bess Hawes, Sis Cunningham, among others. They started a folk group called The Almanac Singers, who took up social causes such as union organizing, anti-Fascism, strengthening the Communist Party, peace, and generally fighting for the things they believed in the best way they could.  They did this through songs of political protest and activism, with Woody becoming one of the prominent songwriters for the Almanac Singers.

A decade later, original members of the Almanacs re-formed as the Weavers, the most commercially successful and influential folk music group of the early 1950s. It was through their tremendous popularity that Woody’s songs would become known to the larger public.